Open champion Shane Lowry downplayed the "distance factor" in golf after a solid end to his US Open at Winged Foot.

Lowry bogeyed the first three holes of his final round, but played the remaining 15 in one under par in tough conditions to card a closing 72 in the year's second major championship.

"I think I did OK," said Lowry, who will head straight to Galgorm Castle in Northern Ireland to headline next week’s Dubai Duty Free Irish Open. "I was happier with my game than my score suggests.

"I’d say three-quarters of the golf tournament I played as good as I can. Played some good golf the last two days, especially to get off to a bad start today and shoot one under my last 15 holes. That’s pretty good out there.

"It’s just so difficult out there. I get frustrated watching the golf in the afternoon when I go home because every time I see people in the rough they’re hitting on the greens, and every time I hit in the rough I can’t seem to get anywhere near the green."

Despite that assessment and the fact that big hitters Matthew Wolff and Bryson DeChambeau - the latter a six-shot eventual winner - were in the last group in the final round, Lowry does not believe distance is the key in golf.

"As long as the golf course is set up correctly, I don’t think distance plays that much of a factor in the game," Lowry said.

"Obviously Bryson has done what he has, but he did it (played well) for a month, and then the last few weeks he’s not been unbelievable, he’s not been contending at the top of events.

"Obviously Dustin (Johnson) hits it far, but Dustin controls the ball very well and people have to realise even though they’re probably some of the longest hitters in the world, they’re still the best golfers. 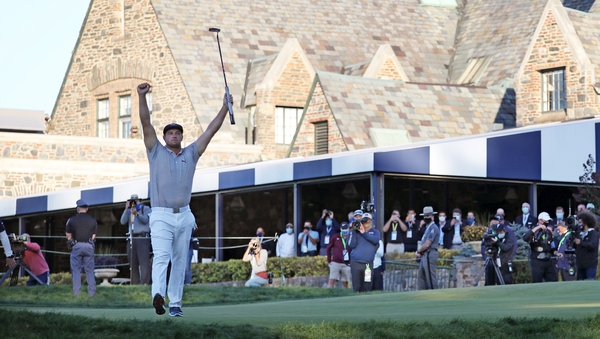