The 2020 Ryder Cup, scheduled to take place at Whistling Straits on 25-27 September, has been postponed due to the Covid-19 pandemic.

The biennial event will be pushed back 12 months as a result of the coronavirus.

Speculation had been mounting in recent weeks that Europe's defence of the trophy, led by Ireland's Padraig Harrington, was to fall foul of the virus, with officials confirming the news today.

Since the PGA Tour restarted, five golfers alone have tested positive for Covid-19, with a number of other players - including Graeme McDowell - withdrawing after their caddies contracted the virus.

Several players have spoken out recently against the idea of playing the event with no fans.

Rory McIlroy said the event should not be played without fans present, while four-time major winner Brooks Koepka indicated he would "possibly" miss the event if it were staged behind closed doors.

The postponement pushes the Italian staging of the event back to 2023.

Minister for Media, Tourism, Arts, Culture, Sport and the Gaeltacht Catherine Martin and Minister of State Dara Calleary confirmed that the decision will result in the 2026 Ryder Cup, which was due to take place in Adare, also being rescheduled.

A statement from the two ministers read: "The Department will continue to work with the European Tour on their schedule and will build on our plans to host the best Ryder Cup yet when the event returns to Ireland.

"A Ryder Cup held in Ireland in 2027 would bring the added dimension of marking the centenary of this special event which was first held in 1927."

PGA of America chief executive Seth Waugh revealed that the uncertainty as to whether or not spectators would be able to be present at the tournament was the main driving factor behind the decision to reschedule.

He said: "It became clear that as of today, our medical experts and the public authorities in Wisconsin could not give us certainty that conducting an event responsibly with thousands of spectators in September would be possible.

"Given that uncertainty, we knew rescheduling was the right call. As disappointing as this is, our mandate to do all we can to safeguard public health is what matters most.

"The spectators who support both the US and European sides are what make the Ryder Cup such a unique and compelling event and playing without them was not a realistic option."

Guy Kinnings, Europe's Ryder Cup director, added: "The Ryder Cup is rightly celebrated as one of the world's greatest sporting occasions, made special and totally unique in our sport by the fervent atmosphere created by the passionate spectators of both sides.

"While that point is significant, it is not as important as the health of the spectators which, in these difficult times, is always the main consideration.

"We considered all options including playing with a limited attendance but all our stakeholders agreed this would dilute the magic of this great occasion."

It means the 2021 Presidents Cup at Quail Hollow Club in Charlotte, North Carolina, will now be played the following September. 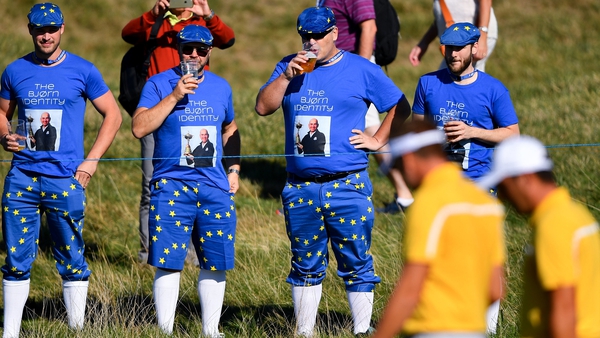 Rory McIlroy: Ryder Cup without fans not a Ryder Cup