The consistency may have disappeared but the competitive edge remains for Tiger Woods.

Frustrated at missing the cut at The Open, only the second time in his career he has done so at a major more than once in the same season, the former world number one remains defiant and determined, if somewhat pragmatic.

His famed powers of recovery are long gone. He knows it. His rivals know it. We know it. If he does not start well there is no coming back.

It was the case at Royal Portrush where an opening seven-over 78, battling his chronic back problems, did for his chances so that even an improved second-round 70 could not save him from a weekend off.

There is a train of thought that, with his physical health issues, the conditions an Open Championship throws up means he is unlikely to be in contention, unlike at the Masters where things are much more in his favour, as proved by his 15th major win in April.

Woods argues to the contrary, even if he accepts he is no longer the hero wearing the cloak of invincibility he did during 683 weeks as world number one in the first decade of the 21st century.

"It's just a matter of being consistent. That's one of the hardest things to accept as an older athlete is that you're not going to be as consistent as you were at 23," said Woods, who has had more back operations (four) than major triumphs (one) in the last decade.

"I'm going to have my hot weeks. I'm going to be there in contention with a chance to win - and I will win tournaments.

"But there are times when I'm just not going to be there and that wasn't the case 20-some-odd years ago.

"I had a different body and I was able to be a little bit more consistent."

On the flip side, winning one of four majors in the year, considering where Woods was not so long ago, now seems eminently acceptable. 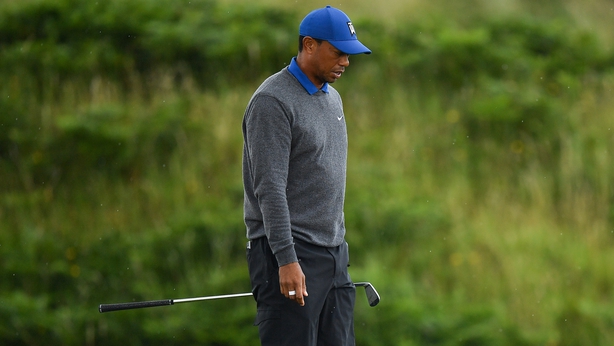 And while a creaking 43-year-old body is probably giving him more problems than he will publicly admit, the competitive streak remains and he birdied the first from 30 feet to briefly hint at the prospect of a remarkable comeback.

Although the way he gingerly and slowly walked off the green told the real story.

As he warmed up he became more expansive, almost driving the 374-yard fifth and, after his second birdie of the day at the short sixth, he ripped a drive down the long seventh. More significantly it was dead centre.

Now he was purposefully striding off the tee to a background noise of howls and 'Go Tiger' shouts.

However, the utterances from Woods himself were more informative as the hole played out with a trip into the gallery - "No, no, no" - a duffed chip and short putt - "Jesus Christ" - and concluded with a bogey - "F**k".

He knew his chances of salvaging anything were fading away and while the mind was willing the body was weak.

But he keeps telling himself he can still do it and he will keep coming back - for now at least.

"I love just the stress of playing in a major," he said.

"Unfortunately, I've only had a chance to win one of them and was able to do it but the other three I didn't do very well.

"Let's be honest, I don't have the flexibility I used to have and never will. So I have to make certain adaptations.

"I just have to continue doing what I'm doing. I've gotten so much stronger over the past year working with my physios and trying to get my body organised so that I can play at a high level.

"It panned out; I won a major championship this year."