A disastrous second round at the WGC-HSBC Champions in Shanghai put paid to any hopes of a challenge from Rory McIlroy who sits 16 shots behind leader Tony Finau.

McIlroy’s torrid second round included a included a triple bogey, a double bogey and two bogeys in on the front nine.

The world number five’s woes began with a bogey at the first, but it was the second hole where his round went off the rails. His solid drive was undone when he pitched his second shot into the water.

Following a dropped shot, McIlroy then underhit his chip up the slope and the ball rolled back down into the water. When he did eventually find the green, his two putts meant he racked up a triple-bogey eight.

A bogey and double-bogey followed before a birdie steadied the ship at the turn. Birdies at 11, 14 and 16 improved matters, but two further bogeys made it a round to forget.

Finau however is the man to catch. The 29-year-old carded four birdies to make the turn in 32, surging to the top spot alongside overnight leader Patrick Reed.

Reed, one of the late starters, found the water on the sixth to hand Finau a three-shot advantage before the leader found an unfortunate bounce off a sprinkle-head on the 11th to go way back of the green, eventually salvaging a double-bogey.

Finau dropped another shot on the 13th but three birdies in the last five holes maintained his grip at the top of the leaderboard. 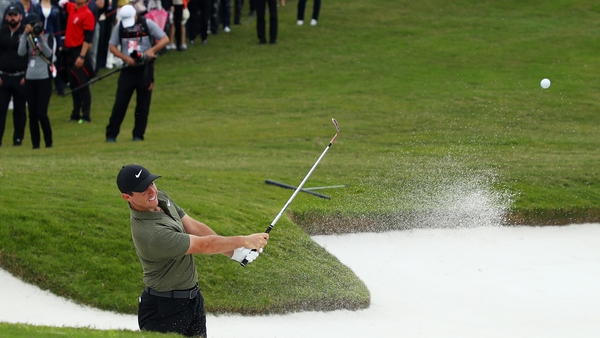 Reed leads as McIlroy breaks even in Shanghai