It's been suggested in some quarters that fans don't live or die by the result of the Ryder Cup. That a sporting year can't be made by victory in that biennial extravaganza alone.

If your soccer team is a shambles, your Gaelic football team is on strike, and your hurling team failed to field for the 140th year in a row, you're probably unlikely to take too much consolation from the fact that the Ryder Cup is to remain on this continent for another couple of years.

How much are we invested in the fortunes of Team Europe? This proud continent. There's much anecdotal evidence that the chief pleasure of winning the Ryder Cup derives from sticking it to the Yanks rather than bringing glory upon this European archipelago.

Keen golfer and proud European Nigel Farage appeared in an ad for Paddy Power ahead of the 2014 competition backing Team Europe against a bunch of "flag-waving, fist-pumping, 'get in the hole' shouting Americans."

As it happened, the 2016 Ryder Cup produced an amusingly stark Brexit division with the seven players from that part of the EU intent on leaving achieving a total of zero points from Sunday's singles matches while the five remaining players from the place the Brexit press like to call 'rump EU' achieving four and a half points.

We suspect that when the Brits went to the polls in that fateful referendum in June 2016, the potential impact upon team unity at the Ryder Cup was low on their list of considerations. 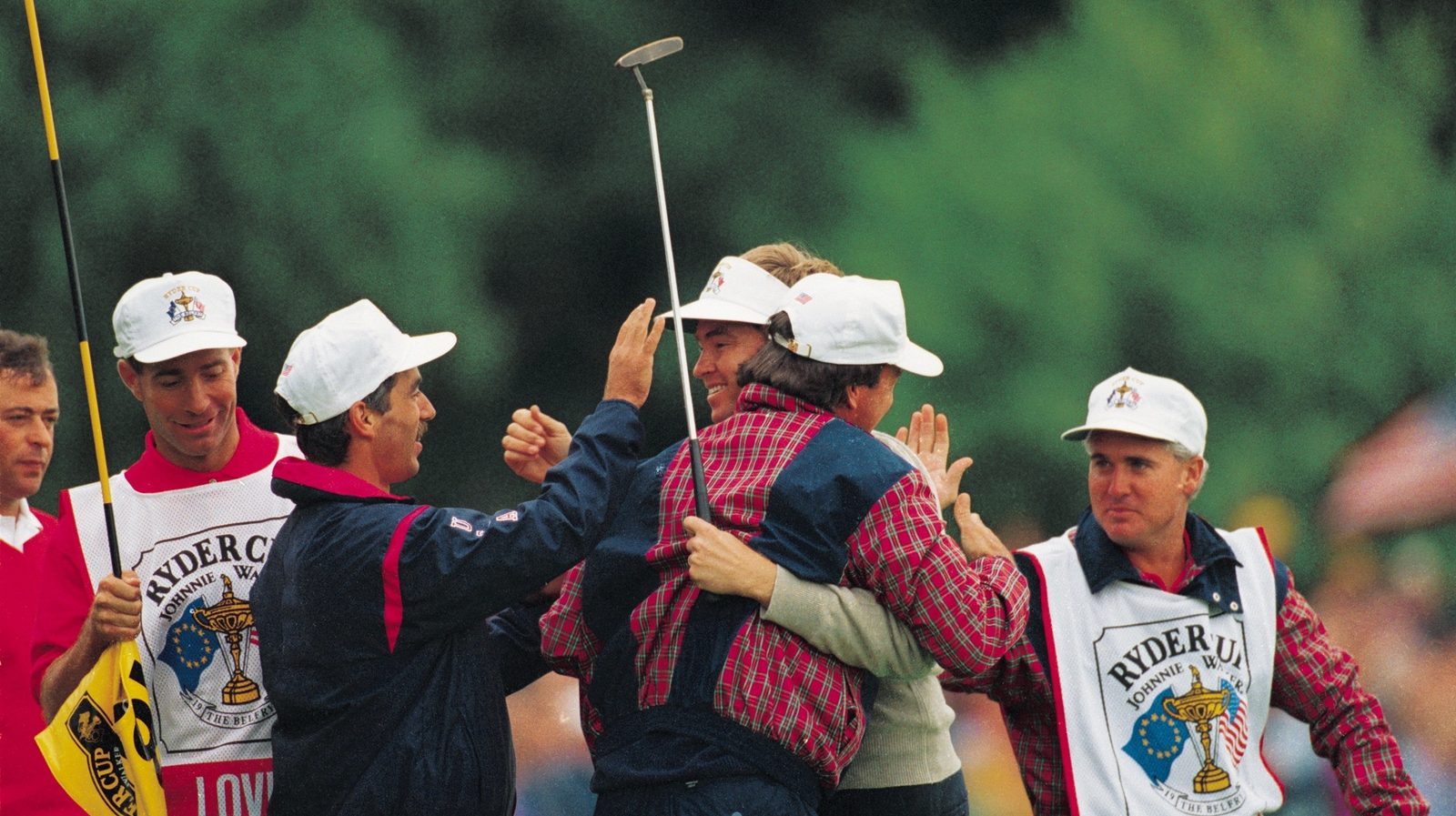 Crucial to most people's investment in the event here is the presence of Irish players on the team. Be honest, if there were no Irish players, would you be bothered?

You have to go back to 1993 for the last time no player from this island appeared in the Ryder Cup. It was also the last time Europe lost at home, falling 15-13 to an American outfit who were famously sheepish about meeting President Bill Clinton beforehand. As the writer John Feinstein noted in 'A Good Walk Spoiled', not one of the US team had voted for the victorious Democrat the year before and they were, you might not be surprised to learn, deeply offended by his tentative plans to tax higher earners. If the GAA was once termed 'Fianna Fáil at play', then American golf could equally be termed 'Republican party donors at play'.

Golf wasn't enjoying its sexiest moment in 1993, it's fair to say. It hadn't quite caught the current in the pre-Tiger era.

Like the British and Irish Lions. When the Irish lads either don't make the grade, or worse, are snubbed, a sizeable proportion of the fanbase here tend to abandon interest in the whole thing

We can't imagine there was too much wailing and gnashing of teeth on this island when a team including Nick Faldo and Peter Baker and Barry Lane came up short against Payne Stewart and co at the Belfry that autumn.

It's a bit like the British and Irish Lions. When the Irish lads either don't make the grade, or worse, are snubbed, a sizeable proportion of the fanbase here tend to abandon interest in the whole thing.

Fortunately, Irish golfers have made a major impact on Ryder Cups down the years, even if that has sometimes been exaggerated in this country. 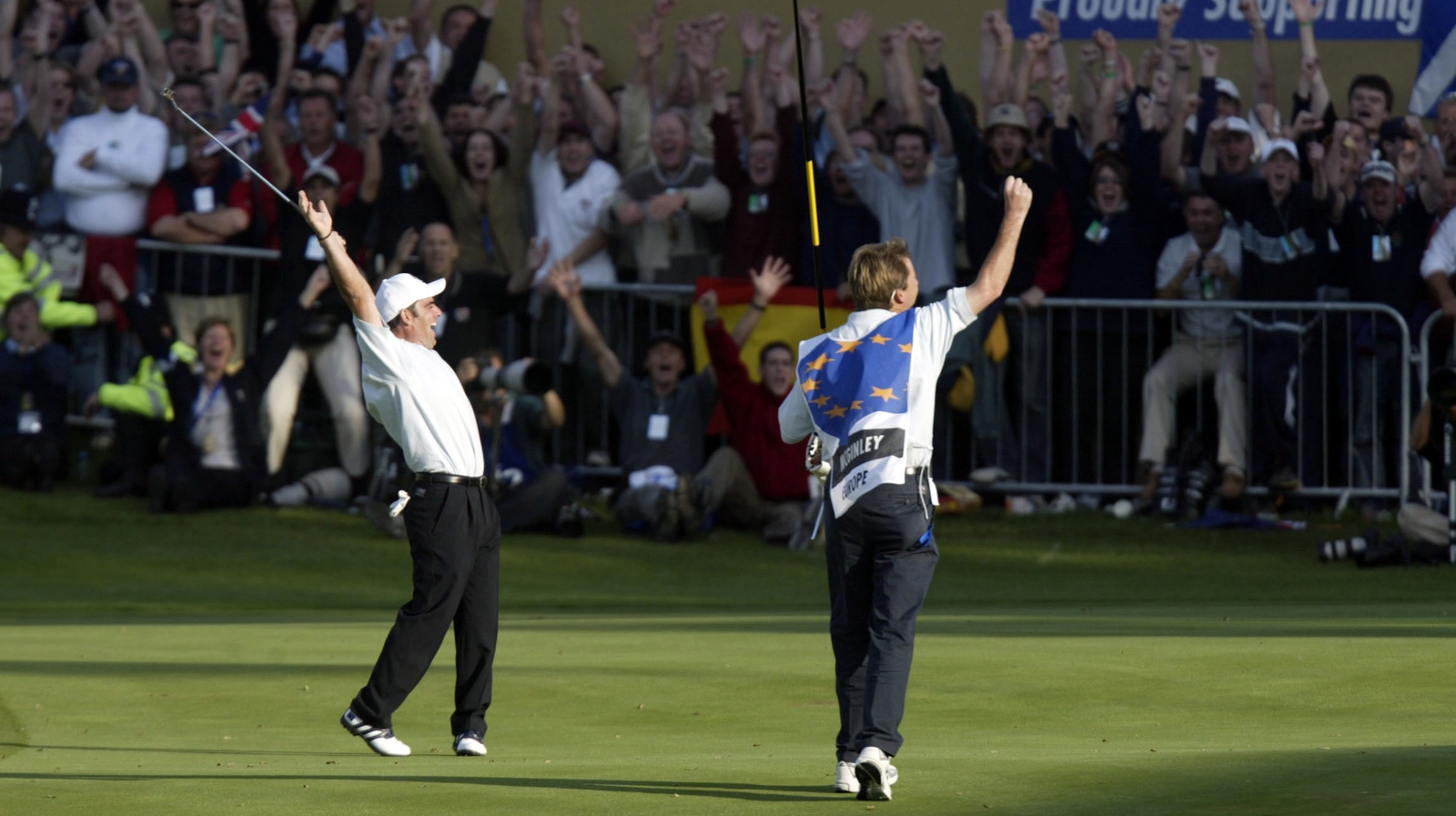 Prior to 1979, it was only golfers from Britain and Ireland that competed in the Ryder Cup and it was only in 1973 that they added the 'and Ireland' bit to the title (24 years before the Lions, in fairness).

From '79 onwards, they amalgamated with the rest of Europe for the very good reason that they were losing the whole time. And lo and behold, the competition, previously a biennial turkey shoot for the Americans, has become a humdinger of a contest.

Paul McGinley - who we should point out has a superb Ryder Cup record irrespective of this - was hailed for sinking the winning putt in the 2002 Ryder Cup though he didn't even win his match against Jim Furyk and it was simply a case of a half being all that was required. (McGinley has Paul Azinger to thank for holing out from the bunker on 18 in the match up ahead which prevented Sweden's Niclas Fasth from stealing all the glory.)

The most famous Irish moment in Ryder Cup is unquestionably Christy '2 iron' O'Connor in 1989. O'Connor wasn't regarded as captain Tony Jacklin's favourite player, a legacy of the Englishman's decision to omit him from the 1985 team despite the fact that he finished just one spot, and not many pounds and pence, outside the qualifying places. Jacklin plumped for Spaniard Jose Rivero to the surprise of everyone, on the grounds that he won at the Belfry that year.

The notion was further bolstered by the fact that O'Connor would, in the first couple of days, only appear in the Saturday morning foursomes. 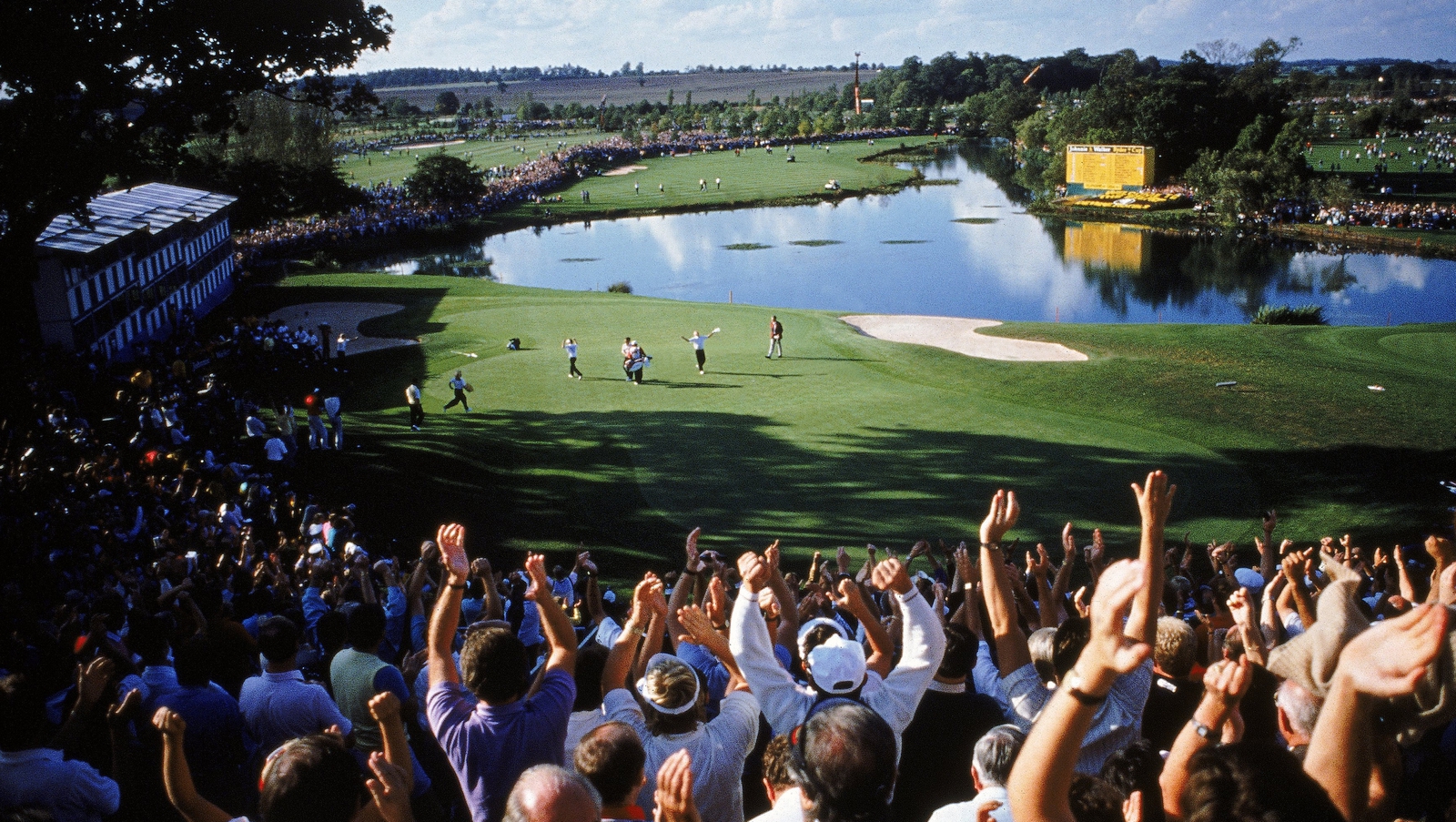 The following day, with Europe having overcome a violent early wobble on the Sunday, the genial Galway man creamed a beautiful 2 iron - you have to name the club - to within a few feet and then sat back and allowed rookie Fred Couples to crumble in the spotlight.

Contrary to popular belief, O'Connor's one-up victory neither won the competition for Europe, nor did it even retain it.

Rather it put them 13-11 ahead and then Jose Maria Canizares, another player who featured little on Friday and Saturday beat Ken Green on the 18th to help the hosts into a 14-11 lead. That America won the remaining three matches to tie the competition has been fairly glossed over in the years since.

Two years earlier, Eamonn Darcy won a famous match against Ben Crenshaw at a critical moment in the 1987 match in Muirfield Village, when momentum seemed to be ebbing away from Europe.

The match was partly famous because Crenshaw snapped his putter in half on the 6th hole and had to putt with a 2-iron for the remainder of the round. Not-so-gentle Ben was renowned as one of the game's greatest putters and he did a sterling job with the iron but not enough to take the point for the US with Darcy winning both the 17th and 18th holes to steal victory from under his nose.

Again contrary to much reminiscence in the Irish golfing press, this win, while seriously important, did not actually get Europe to 14 1/2 points. That happened a few minutes later when Seve Ballesteros saw off Curtis Strange.

Walton, the penultimate name on the European singles roster in his only Ryder Cup, pipped Jay Haas in the critical match, cosying a putt on the 18th up to gimme range to seal a one-up victory. 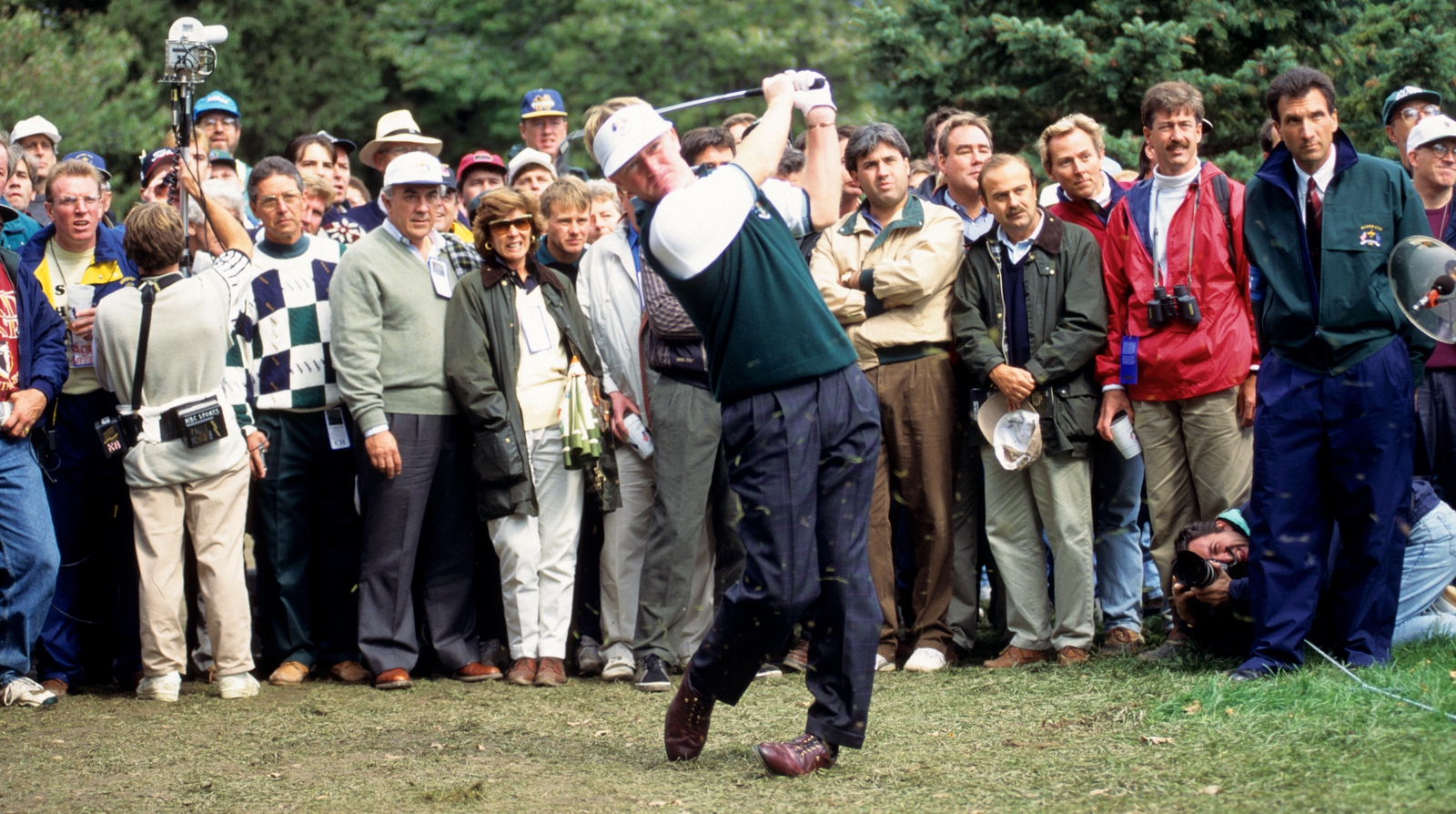 Fifteen years later, McDowell, after a season in which he won the US Open, steadied a wobbling European ship with victory in the final match against Hunter Mahan, his 3 & 1 getting the hosts to 14 1/2.

In between, the whole Ryder Cup kaboodle landed down on top of Co. Kildare in 2006. Historians may regard the whole weekend as the very apex of the Celtic Tiger. The K Club hosted the event at the very zenith of Europe's period of dominance, which bizarrely coincided with a time when none of their players were capable of winning majors.

But for the redoubtable efforts of the antipodeans and the South Africans and even the Fijians, we'd have had US clean sweeps in the majors every year in the first half of the noughties.

It was as if all the frustration of watching those stubbornly individualist hot-shot Yanks hoover up all the game's biggest prizes was unleashed in torrents by the comradely Europeans come Ryder Cup time.

Almost to vindicate this thesis, Padraig Harrington's own Ryder Cup record took a nose-dive around the time he started winning majors.

Europe crushed the US in a match best remembered for Darren Clarke's superb performance in the first tournament following his wife Heather's death.

There was much annoyance in Irish golfing circles that an Irishman wasn't considered for captain for the first Irish Ryder Cup, Des Smyth having to contend himself with a vice captaincy.

No, Ireland would have to wait until 2014 for its first Ryder Cup captain. 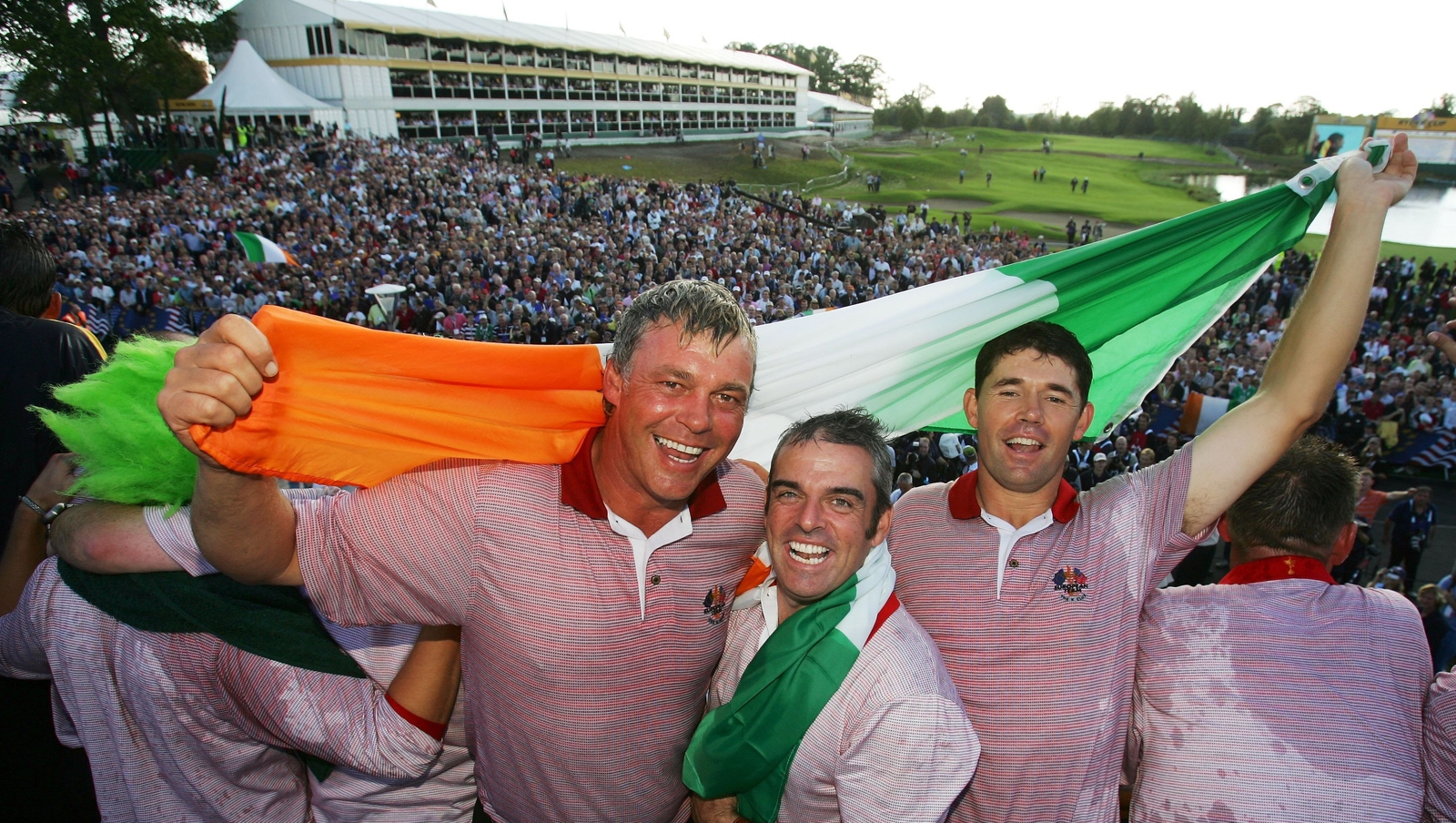 Darren Clarke, Paul McGinley and Padraig Harrington with the tricolour after the 2006 Ryder Cu

We have to come clean here. Four years ago, this writer incurred the wrath of golf fans everywhere by writing an article claiming that the Ryder Cup captaincy was a puffed up sinecure, inflated in importance to an absurd degree by the media. Or a 'bulls*** job' as the headline put it.

It wouldn't be overstating it to say that golf fans didn't think much of this theory and it actually turned out to be a very bad year to make that argument.

Paul McGinley took to the job like he was born to perform the very particular role of captaining golf teams (there could be thousands of people out there now made for that calling but they'll never know it).

He was fabulously meticulous, sounding out gurus from all over the sporting world over how to go about winning this thing. Alex Ferguson was asked in to give pep talks to the players and the TV cameras even caught Jim McGuinness standing among the European backroom staff as Sergio Garcia played an approach shot on the Sunday (McGuinness admitted later he did "very little" there).

Jim Gavin was also thanked for his input afterwards.

McGinley broke new ground by appointing a record total of five vice-captains. Even some Ryder Cup true believers have trouble understanding what all these guys could bring to the party.

Padraig Harrington, speaking about his vice-captaincy experience in later years, recalled that he had retrieved a wedge left behind in a toilet at the back of one of the greens, making his one of the most consequential vice-captaincies in the history of the competition.

It's arguable that less preparation went into the D-Day landings than went into Europe's 2014 Ryder Cup effort. By contrast, McGinley's opposite number Tom Watson allegedly gave little thought to how he would perform the role and had strips torn off him in the post-tournament press conference by Phil Mickelson.

Watson, incidentally, captained the victorious 1993 US team but in 2014 he resembled a hurling coach who won an All-Ireland 20 years ago only to return and find the modern player allergic to his methods.

So, McGinley had the honour of being the first Irish captain and did a sterling job. Darren Clarke made it two in a row in 2016 but could not stop Europe falling to their heaviest defeat (17-11) in 35 years at Hazeltine.

Clarke will certainly not be the last with Padraig Harrington a virtual shoo-in to get it in the next couple of instalments, and very possibly in 2020.

With a more slight Irish involvement this year, there's probably less scope than ever for partisan intensity to flourish in this country.

What matters here above all is whether the thing is good TV.

In truth, those one-sided European wins in Oakland Hills in 2004 and in the K Club in 2006 were dull as dishwater affairs, with the cult of Colin Montgomerie perpetuated on Sky Sports proving an added irritant.

No, the Ryder Cup is at its best when it's closely fought and there's more than a hint of niggle in the air. Above all, what we should be shouting for next week is 14 1/2 to 13 1/2.

Follow the Ryder Cup via our live blog on RTÉ.ie/sport and the News Now app.