Rory McIlroy came out firmly on top in an early instalment of his so-called 'rivalry' with Jordan Spieth on the opening day of the Players Championship at Sawgrass.

McIlroy and Spieth were placed in the same group for the first time since Spieth won the Masters to move to world number two behind McIlroy, who extended his lead in the rankings thanks to victory in the WGC-Cadillac Match Play on Sunday.

And the Northern Irishman continued that form on Thursday with an opening round of 69, three under par, to lie two shots off the then clubhouse leader, Japan's Hideki Matsuyama.

In contrast, Spieth struggled to a three-over 75 and showed his frustration by throwing his ball into the water after a bogey on the 16th, while the third member of the group, Australian Jason Day, matched McIlroy's 69.

Padraig Harrington recovered from a two-over par front nine (thanks to a double bogey on the ninth) to finish one under overall.

Shane Lowry hit five birdies but also racked up four bogeys and a double as he and Graeme McDowell (four bogeys and three birdies) both finished on one over on 73.

Darren Clarke withdrew after 11 holes with a wrist injury.The 2016 Ryder Cup captain was 10 over par at the time.

Starting on the back nine, McIlroy opened with five straight pars before a superb approach from a fairway bunker on the 15th set up his first birdie of the day from six feet.

The 26-year-old then holed from similar distance for an eagle on the par-five 16th and safely found dry land on the infamous 17th before two-putting for par from long range.

McIlroy dropped his first shot of the day after a wayward approach to the first and had a stroke of bad luck on the second when his approach hit a sprinkler head on the edge of the green and kicked way left into the crowd.

From there he could only hit his third shot into a greenside bunker but got up and down for par and also birdied the eighth to continue his upward curve in the event.

McIlroy missed the cut on his first three appearances at Sawgrass and failed to break par in any of his six rounds, but carded an opening 66 in 2013 and went on to finish eighth, while closing rounds of 69 and 66 saw him improve to sixth place behind Ryder Cup team-mate Martin Kaymer 12 months ago.

Spieth played the final round alongside Kaymer last year before eventually finishing fourth, the 21-year-old having played his first 58 holes without a single bogey.

The chances of repeating that remarkable feat disappeared immediately as Spieth bogeyed his first two holes, and although he reduced the damage with a birdie on the 13th, another dropped shot on the 16th led to his ball coming to a watery end.

Spieth got back to one over with a birdie on the second but bogeyed the next two holes and told reporters his putting had saved him from shooting 80 and that he needed to "find something" on the range.

"Sometimes you have bad breaks and have a bad day. This wasn't one of them," Spieth said. "I really struggled out there."

McIlroy, who needed just an eight iron from 205 yards to set up his eagle on the 16th, was pleased with his opening round, the result of maintaining a more conservative approach at Sawgrass.

"I think anything under par, and definitely anything in the 60s is a very good start today so I am pretty pleased with that," McIlroy told Sky Sports 4.

"You just have to be very, very patient. I have a lot of pars on my card there. A lot of patience and picking up the birdies where you can. The first time I got here I felt it was a course where if you are playing well you should shoot 67 or 68 every time, but it's not really like that.

"It can jump up and bite you very quickly and you have to know sometimes that par is a good score and you move on."

American trio Billy Horschel, Troy Merritt and Ben Martin were one off the lead after rounds of 68, while compatriot Rickie Fowler was six under after 11 holes before running up a double bogey on the third and dropping a shot on the ninth in a 69.

At the start of the week Fowler and England's Ian Poulter were named as the most overrated players on the PGA Tour in an anonymous poll of their peers conducted by Sports Illustrated, even though Fowler finished in the top five of all four majors in 2014.

"I guess top-fives in four majors aren't that good," Fowler told reporters. "I'll take care of my business and I'll be just fine."

Tiger Woods was among the later starters and reached the turn in one over par after two birdies, one bogey and a double bogey on the eighth, where he grasped his head in his hands after a tee shot which was struck so badly it found a water hazard 35 yards short of the green.

Woods began the back nine with four pars before a birdie from 12 feet on the 14th took him back to level par, five shots off the clubhouse lead now shared by Matsuyama, Canada's David Hearn and American Charley Hoffman, who had eight birdies and a triple bogey in his 67.

Former Open champion Louis Oosthuizen had also reached five under with a birdie on the 16th, only to find water on the 17th and run up a double-bogey five.

And minutes later JB Holmes carded his fifth birdie in six holes on the 16th to move to five under, only to follow Oosthuizen into the water on the next. 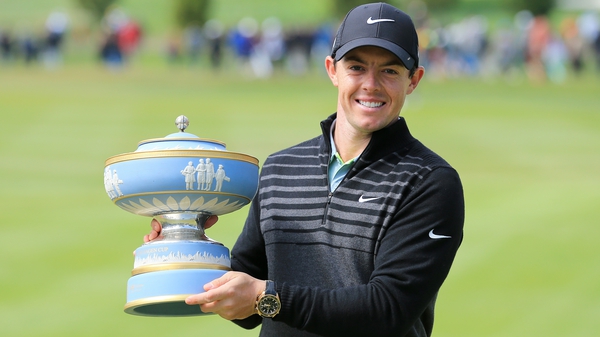