For a long time, the 2021 All-Ireland championship trundled along a predictable course. It was the fifth time in nine years, the exact same quartet had filled the semi-final slots.

On the other hand, the final three games of the year offered us a rare glimpse of the unpredictable. Something we hadn't experienced since about 2014. Both semi-finals and final going the way of the underdog, albeit the final was widely pegged as being as close to 50:50 as a game could be. That, again, was a welcome change from recent years.

It ends with Tyrone coming slightly out of leftfield to claim an All-Ireland title in the first year of a new regime. The team contained many of the same faces it had for a few years, usually banging their heads off the ceiling in the semi-final or final.

Despite remaining consistently competitive, there was a slight air of despondency and stagnation in the latter years of the Mickey Harte era. Things were freshened in 2021. Their gameplans were always sound and well-honed, the players' work-rate always unstinting. 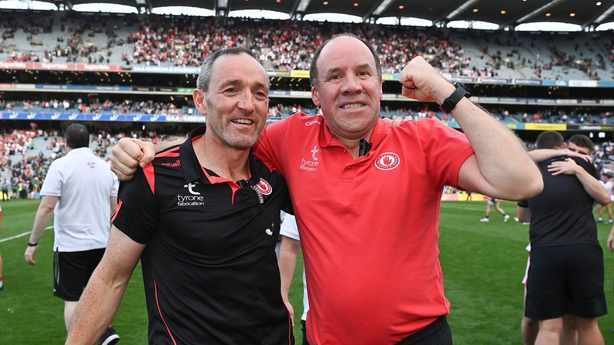 After both their semi-final and final victories, much of the post-match pore-over centred on the psychological hang-ups of their opponents but Tyrone revealed themselves, yet again, as a team of great skill and stubborness. Amid all the admiration for their famed tactical shrewdness, it was easy to overlook the sheer quality in their ranks - the likes of Darren McCurry, Niall Morgan, Niall Sludden and Peter Harte emerged as the stars of the decider.

As Feargal Logan made clear afterwards, he knew he was inheriting a core of terrific players who were probably being underrated in the national conversation. So it proved.

Mayo's All-Ireland final record would cause even the most hardened rationalist to cast their eyes to heaven and ask 'why us?'

There's no getting away from the fact that the accumulation of All-Ireland final losses is staggering. Six in ten years. One third of all finals lost since 1989. The Mayo phenomenon is something almost without parallel in world sport.

Taken in isolation, Saturday's All-Ireland final result doesn't require any supranatural explanation. Tyrone were far slicker and more economical in their execution of chances, their backs halted Mayo's running game, and their scramble defence snuffed out danger when it cropped up.

In the grim aftermath of the game, after which the Mayo bus slipped away early, James Horan, in his relatively short press conference, did gamely attempt to play up the positives from 2021, citing the quick rate of development of their younger players. This, after all, is a fairly new-ish Mayo team, one essentially in transition since the 2019 semi-final.

There's an obvious common thread in their final appearances since 2012 in that goals are killing them. Cumulatively, they've scored 10 more points than the opposition across the last seven finals. But they've conceded 12 goals (a remarkable number of them palmed goals for some reason) and scored just three, two of them coming from a defender, Lee Keegan. It speaks to a lack of killer thrust at the top end of the pitch.

On Saturday, they had numerous serious chances - the Loftus 'almost' open goal, Aidan O'Shea's cumbersome execution when Morgan was caught off his line, Conroy shanking a shot wide of the near post, the penalty...The opportunities were there to write a different narrative but weren't seized.

Judging by the reaction outside the ground, at least some portion of the Mayo support is at the end of their tether with it all. Some of the weary post-match exclamations went well beyond gentle self-deprecation. In the taverns, there's little tolerance for the mention of mitigating factors, after so many final failures, but the absence of Cillian O'Connor was glaring on Saturday.

Horan was minded to focus on the "disappointing" shortcomings in skills and decision-making on the big day, rather than indulge in the usual pop-psychology that rises to the fore when Mayo are under discussion. The fact that these shortcomings chose to appear on All-Ireland final day - a final they clearly had the potential to win - suggests that psychology may have to form a big part of the answer. The weight of history gets even heavier after 2021.

In a long-term sense, the most consequential development in 2021 is the Dubs' surprisingly abrupt decline. In the wake of the sixth title, Diarmuid Connolly sent a tweet "Tá an seacht ag teacht". That was to be the mantra throughout the year, the Dubs were still remorseless, keen to gobble up more titles.

They were initially discommoded by the rumbling of their breach of the training ban during lockdown.

Stephen Cluxton, who turns 40 in December, then dropped off the panel altogether. It was initially denied that he had retired. At least one player engaged in some mis-direction, telling national radio that Cluxton's return was imminent. Bizarrely, Dessie Farrell could only tell the press that he didn't really know what Cluxton's intentions were and hoped we hadn't seen the last of him in the Dublin jersey.

The obvious assumption, given his age, is that Cluxton has simply retired and opted against announcing as much. Indeed, this would be wholly consistent with his persona throughout his career.

Out the field, Jack McCaffrey stayed gone. Paul Mannion, at his electric best as recently as the 2019 championship, opted out of the inter-county scene.

There were strong hints of a slippage through the Leinster championship. Whereas before they were battering teams in a borderline unseemly fashion, now the margins at full-time were strikingly modest. Backing the Dubs against the handicap in the Leinster championship has been a reliable money-spinner for years. Suddenly, devotees of this betting strategy were losing their shirt. For the first time in aeons, the poor bedraggled masses of Leinster were departing the field after games against Dublin with their morale bolstered rather than thoroughly destroyed.

The manner of their disintegration in the last 50 or so minutes of the All-Ireland semi-final was certainly startling to witness. Their subs bench, once one of the most intimidating weapons in their arsenal, looked particularly unprepossessing for the first time in a while.

The Dubs, the most knowable quantity for the past six or seven years, could now almost be classed as an enigma. Where do they stand heading into 2022? Was it Kerry '83 or Kerry '87? They still boast a formidable array of talent, from Fenton to O'Callaghan to Kilkenny, all easily young enough to win a pile more. One assumes that they have the resources, systems and personnel to win All-Ireland titles on at least a semi-regular basis into the future, although the oppressive dominance of the last decade may not return.

The chatter in Kerry, meanwhile, is currently dominated with rumblings about the manager's position. As it is, Peter Keane remains in situ, although if he does survive into 2022 it will be the first time a Kerry manager has lasted into a fourth year without yet winning the big one.

Kerry, for all the post-match recrimination, and the lamentation about their defensive foibles, still only lost by a point to the eventual All-Ireland champions, despite frittering away a host of chances. But impatience is growing. We can safely say if Keane doesn't win next year, there won't be a fifth season.

Barring any unforeseen and unwanted events, the traditional knockout championship will return to the dusty shelf of history.

The old system offered us a wondrous day of retro novelty in late November 2020. Tipperary, in their commemorative Bloody Sunday jerseys, winning a first Munster championship in 85 years, Cavan shocking Donegal in the evening game to win only their second provincial title of the past half-century.

While heartwarming for the neutrals, it did tee up a pair of rather one-sided semi-finals. By contrast, with four big guns surviving the provincial phase this year, the semi-finals proved the highlight of the 2021 season.

The exact championship format we'll have in 2022 isn't yet set in stone. The league could become the championship, or the provincial boundaries could be redrawn into four groups of eight. More likely, we'll revert to the Super 8s structure of 2018, 2019, with a second-tier championship on offer for teams in Division 3 and Division 4. Although there is a possibility that the Super 8 format could be abandoned with a reversion to the 2001-17 format, with a second tier champ incorporated.

Will that mean a more unpredictable championship in 2022?

The layer of teams underneath the top four have the most to gain if the Super 8s do return. In particular, some of the sharks in Ulster may be relieved at the return of 'the second chance'.

The portcullis came down hard on Donegal's campaign twice in the last two years. They've been so prominent for so many seasons, it's a shock to realise they've conspired to miss out on the last-four in every season since 2014.

Armagh, a team long touted as one with the talent to break into the elite, participated in a ludicrously open and high-scoring game against Monaghan in Newry. They appeared on the brink of a fabulous comeback victory before handing the game back to Monaghan in the final minutes.

The notion was floated, during that brief phase when Tyrone had opted out of the championship, that Monaghan could be invited back to do a Denmark '92 on it. As it is, they may have regrets. A mere one-point loss to the All-Ireland champions in a game they could easily have won.

Galway, despite an abundance of talent in their forward division - Walsh, Comer, Tierney, Finnerty - are struggling to properly evolve into contenders. Kevin Walsh appeared close to cracking it in 2018 - when they won a huge number of games across league and championship. But the dominant sound throughout that run was griping at the (overtly pragmatic) manner in which they were grinding out games and their exploits went slightly unappreciated. Under new management, they're still scrambling about, trying to find the right formula.

Meath football, after underage success, not to mention their women's stunning victory, feels good about itself for the first time in a long time. Still there's a long road to travel.

In truth, everyone outside of this year's semi-finalists has a long road to travel.

It seems fanciful that the All-Ireland winners in 2022 could be drawn from outside that quartet - at a push, Donegal might have a chance.

The sense at this stage is that Kerry, as in 2021, will start as favourites again, though that may change if a few of Dublin's greats end their self-imposed exile.

Tyrone, as Kerry partisans in the 'Team of the 2000s' debate never tire of telling us, failed to achieve back-to-back during their last glorious decade. The challenge of notching a historic first back-to-back may furnish Dooher, Logan and co with added hunger in 2022.

Either way, 2021 could yet be remembered as a pivotal year in the history of the football championship, with a small semblance of unpredictability and democracy returning after a half-decade of oppressive one-party rule.