Meath manager Eamonn Murray has said that the Royals will carry no fear into their forthcoming All-Ireland semi-final with Cork.

Murray's side had entered their quarter-final clash with Armagh as underdogs, but they were much too strong as they prevailed on a 3-15 to 1-14 scoreline at Clones.

Goals from Emma Duggan, Niamh O’Sullivan and Emma Troy saw Meath run out convincing winners, a victory that sees the 2020 TG4 Intermediate champions into the Senior semi-final in their first season back at the grade.

"It means everything to me," said a delighted Murray. "It is beyond my wildest dreams to ever get this far. I knew they would, but I didn’t think I’d be with them at that stage. I thought it might take two or three years to get that far.

"The last year for us has been out of this world. Intermediate champions before Christmas, League champions, Division 1 football and now a (Senior Championship) semi-final.

"Anything is possible for this bunch of girls here. They train three or four nights a week, they enjoy it. There’s never a bad word out of them, they just love being together and the friendship they have.

"We showed no fear of them today and that’s how we are going to play Cork in two weeks’ time. Roll it on."

Armagh manager Ronan Murphy was left bitterly disappointed by his side’s showing as they failed to reach the last four for the second successive season.

Aimee Mackin did carry the fight to their opponents, but her late goal proved to be nothing more than a consolation.

"We’re very disappointed. We didn’t perform at all," said Murphy. 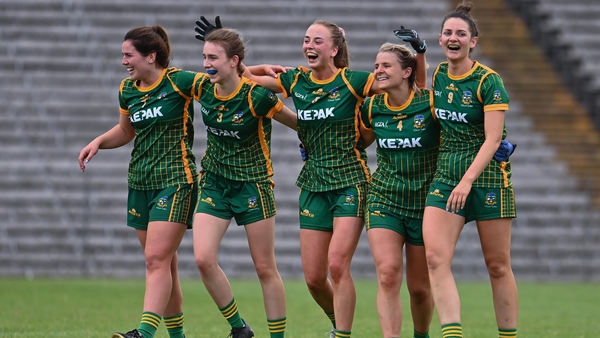 Meath power past Armagh and into last four