Full-forward Jack Bryant led the way as Offaly qualified for the All-Ireland U-20 football final with a superb five-point win over Cork in Portlaoise.

Offaly led by 1-07 to 0-03 at the break and withstood a spirited Cork rally in the second-half to reach their first final since they won their only title in the grade in 1988.

And they will go into that final against either Down or Roscommon full of confidence after this win in a thrilling contest.

Offaly, aided by the slight breeze, deservedly led by seven at the interval and should have been much further ahead but they failed to convert a couple of good chances and were also denied a penalty.

The sides were level twice in the opening 13 minutes before Cormac Egan edged Offaly in front after the other corner-forward Aaron Kellaghan appeared to be fouled as he bore down on goal.

Offaly were full of running from deep and full-back Tom Hyland blazed wide with a goal chance after 19 minutes, while Bryant did likewise moments later after he and Egan had dispossessed Cork corner-back Colm O'Donovan.

The Cork defence struggled to contain Offaly and a sin-binning of wing-back Adam Walsh-Murphy for pulling down Cathal Flynn as he headed for goal. 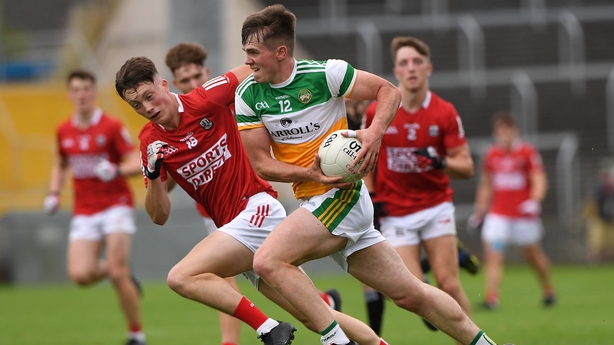 Offaly outscored Cork by 1-04 to 0-01 while they had the extra man with Byrant shooting home a superb goal into the top right corner four minutes from the break after landing two points just prior to that and they went in leading by seven.

Kellaghan and Bryant extended Offaly’s lead with points inside four minutes of the restart but then Cork came storming back and hit the next five points from David Buckley (two), Colin Walsh, Brian Hayes and Ciarán O’Sullivan to cut the gap to 1-09 to 0-08 after 44 minutes.

Offaly responded with Bryant setting up Cathal Flynn and the wing-forward shot low to the net.

Cork hit back and landed the next three points before Keith O’Neill responded for Offaly to leave it 2-10 to 0-11 with seven minutes remaining.

Cork piled forward and with the Offaly defence forced to foul, David Buckley tapped over three frees to reduce the margin to two points going into the closing stages but Bryant wrapped it up with his second goal after being set up by Egan to book their place in the final.