Clare will face Cork in a hotly anticipated round 2 All-Ireland SHC qualifier, while Galway have been drawn to play Waterford in a repeat of the 2017 All-Ireland final.

Brian Lohan's side progressed to second phase of the qualifier after overcoming Wexford in a high-profile grudge match.

Galway and Cork were awarded a bye into Round 2 after provincial semi-final losses to Dublin and Limerick respectively.

The matches will take place this Saturday, 24 July.

Waterford v Galway will take place in Semple Stadium in Thurles at 2pm.

The meeting of Clare and Cork will be held in the LIT Gaelic Grounds at 4pm. Both matches are on Sky Sports with radio coverage on RTÉ Radio 1.

Reacting to the draw, former Tipperary hurler and RTÉ hurling analyst Shane McGrath said both Clare and Cork should enter their game high on confidence.

"It's very exciting, getting to knockout hurling now with the weather heating up and now the draws are heating up," the 2010 All-Ireland winner told Morning Ireland.

"Clare v Cork. The last time they met, the 2019 Munster round robin, Clare won that by five, they're coming in full of confidence. They're not reliant on Tony Kelly anymore.

"They had ten scorers at the weekend and Kelly was one of the lowest from play, so that's a great thing for them. They'll be coming in with confidence although Cork will too, after what they did against Limerick for so long.

"The Waterford-Galway one, I think they've played 11 times and Waterford have only lost once - but that was the All-Ireland final in 2017. 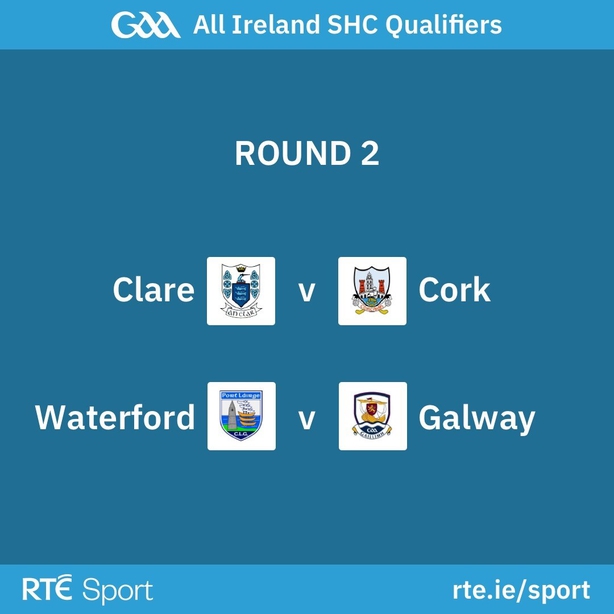