Tipperary manager Liam Sheedy lamented his side's mistakes and lethargy after their nine-point defeat to Limerick in the Munster SHC semi-final.

The reigning All-Ireland champions were never ahead during a game played in a driving rain and conceded three goals, including a crucial 46th-minute penalty that was converted by Aaron Gillane in the 3-23 to 2-17 loss at Páirc Ui Chaoimh.

"They’re very strong physically, they’re an excellent side, and they were full merit for their victory.

"We’re just really disappointed. We never brought the energy to the pitch that we would expect to bring on a day like today, and that’s hugely disappointing for me and for the lads."

John Kiely was delighted with his side's resilience in their victory over Tipperary but Premier boss Liam Sheedy said his team  had made basic errors and "never brought the energy" he had expected. #GAA #RTEGAA #TIPvLIM pic.twitter.com/wNoor3hKMv

Limerick boss John Kiely was understandably happier with his team but said that despite his team maintaining a scoring cushion, he had been wary of Tipperary's goal threat throughout.

"We had to work extremely hard for it, the game was never really done," he said. "A break or two and it could have gone either way.

"But I'm really really proud of my boys. They worked extremely hard tonight and I thought our second-half performance was very credible. We showed great resilience.

"We supported the the man in possession really well and took our man really well. We created a lot of good scoring chances out of it.

"They’re a top-class outfit. We have huge respect for them as a team and I’m sure they’re going to be there when it comes to the closing stages of the competition as well.

"It's only a victory for today, we understand that." 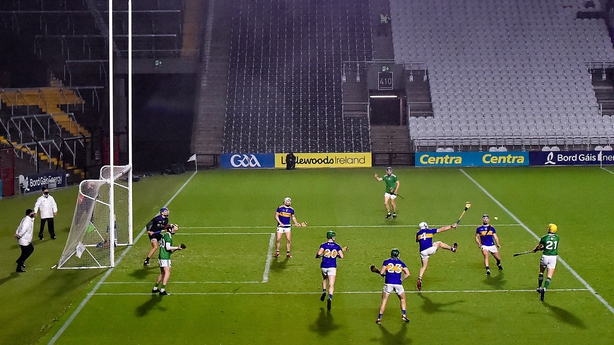 Kiely also expressed hope that limits on the number of players and support staff allowed might be relaxed if the Covid-19 landscape was to change for the better.

"We’re glad we can go back to the rest of our group that couldn’t be with us today and meet up with them on Tuesday night.

"It’s really difficult for us to come without some of the lads at the moment, but hopefully in the next few weeks, if things settle down again we’ll get them back."