TG4 cameras will be in Tuam and Ballybofey for the top-flight encounters involving Galway-Mayo and Donegal-Tyrone. Deferred showing of Kildare v Cavan in Division 2 from approx 5.30pm.

All Division 2 games (apart from Cavan v Roscommon) and all Division 3 and 4 games available to stream on GAAGO.

Watch highlights of the weekend's action on The Sunday Game on RTÉ2 from 9.30pm.

Sunday Sport (2pm-6pm) on RTÉ Radio 1 will offer live commentary, analysis and reaction and all the day's events.

Sunday has more blustery thundery showers with a risk of hail, most frequent across Atlantic counties. Some sunny spells too, with the driest and brightest conditions across the eastern half of Ireland. Highest temperatures will range from a cool 9 to 12 degrees, in fresh west to southwest winds.

It had been a hectic week of GAA without a ball being kicked until Saturday's feast of action.

The coronavirus continues to wreak havoc with everyday life in Ireland and while senior inter-county action has been given the go ahead during Level 5 restrictions, there are likely to be bumps in the road.

Already this week we have had walkovers in both codes,the intermediate and premier junior camogie championships decimated, the underage championships indefinitely postponed, a GPA demand for baseline testing, an RTÉ poll showing a majority of Irish people opposed to the Championship continuing, fixtures moved to avoid walkovers and suggestions that employers could impose restrictions on inter-county employees.

After all this it's been a relief to see some Gaelic football break out.

The leagues conclude today before the All-Ireland Football Championship begins next week, which seems a long way away at this point. 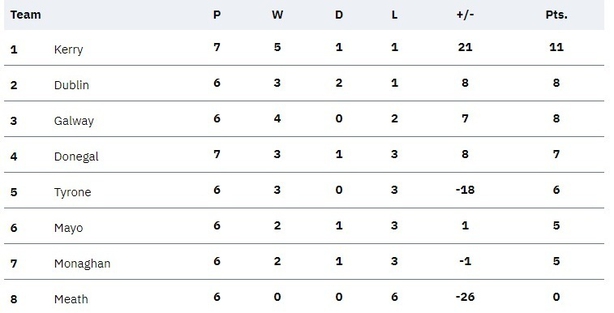 Kerry secured their 21st title and first since 2017 with a win over Donegal in Tralee on Saturday afternoon.

At the bottom, Meath are already doomed and Monaghan will join them if they don't beat the already relegated Royals.

If Seamus McEneaney's men can secure a result then they will leapfrog the losers of Mayo v Tyrone. A draw in Castlebar would suffice for Mickey Harte's men, while Banty's Monaghan could survive with a point if Tyrone beat Mayo. 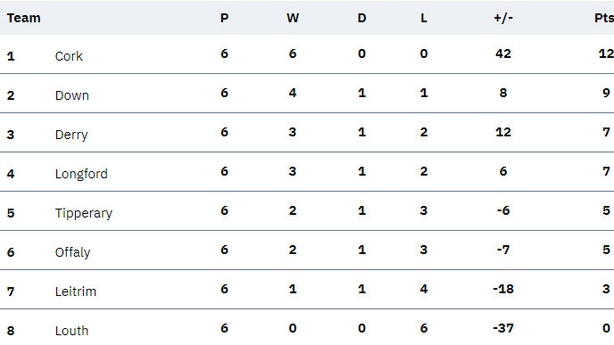 Cork are promoted with a game to spare... literally, as their final match away to Longford has been conceded by the Leinster side, so Cork will go up with 15 points, but without the opportunity to improve on their impressive scoring difference.

Down will join Cork in Division 2, regardless of today's results, as they have beaten Derry already, so would take the head-to-head battle in case of defeat in Drogheda and a Derry win in Tullamore.

Louth are already down and will be joined by Covid-impacted Leitrim if Terry Hyland's men can't beat Tipperary at home.

If Leitrim win and Offaly get nothing at home to Derry the final relegation spot will come down to a 'mini league' points difference battle between Tipp, Offaly and Leitrim, so there is something still to play for in the third tier.