Oisín McConville would like to see a uniformity of approach as the GAA begins to welcome back limited crowds to club championship action.

Currently no more than 200, including players, management, officials and ground staff, may assemble for games in the Republic, while following a directive from the Northern Ireland Executive, Ulster GAA has recommended that their maximum capacity should be 400 for the 'six counties'.

The original Government roadmap would have allowed for 500 to attend fixtures from 20 July in the Republic but that plan was shelved due to concerns over a resurgence in the coronavirus pandemic.

Prior to last night’s announcement from the Northern Ireland Executive no supporters were allowed into games in that jurisdiction.

According to McConville, a 2002 All-Ireland SFC winner with Armagh, that was creating a scenario where supporters were crowding around to catch a peek of the action, and he welcomed the new directive.

"It’s welcomed by the majority of people up here because in some of the games last week we had a lot  of people congregating in the same area trying to get a view of the game having not been allowed into the ground," he told RTÉ Sport. 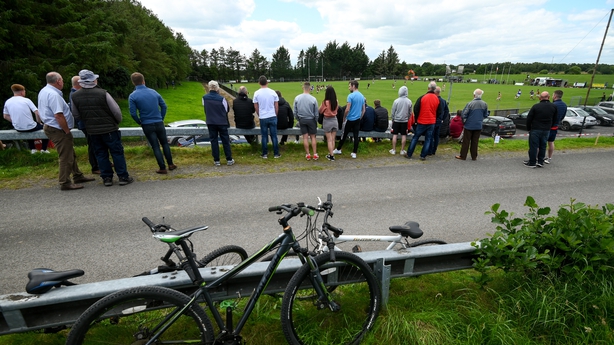 "This is a much safer option and it’s definitely welcome because there is a real hunger there for people to get back into watching the games.

"When you think of the grounds that we have nowadays, the majority of championship matches coming up will be played in big grounds and 400 in a ground is not a stretch.

"Hopefully that becomes uniform because we live right on the border.

"Last week we had no spectators in Armagh and two miles down the road in Co Louth you were allowed spectators.

"Now that seems to have flipped on its head a little bit.

"Hopefully we can get to something uniform, agreed by both governments and the GAA and that's when we’d get to an acceptable point that people would be happy with."