ONLINE
Live blog on RTÉ.ie and the RTÉ News Now App from 12.30pm.

All live and deferred action on GAAGO.

Highlights of all the weekend's action on Allianz League Sunday on RTÉ2 and the RTÉ Player from 9.30pm. Joanne Cantwell will be joined by Ciarán Whelan and Pat Spillane.

Weather conditions will turn increasingly disturbed over Ireland this weekend as the jet-stream over the north Atlantic intensifies steering a series of low pressure systems towards Ireland. #StormCiara

Sunday: As storm Ciara tracks eastwards to the north of Ireland, south to southwest winds will strengthen and become very strong and very gusty with possibly damaging gusts and with gales along coasts. A band of heavy rain will move quickly southeastwards across the country with a risk of localised flooding. Showers will follow in the afternoon. Through the late afternoon and evening, winds will become westerly. They'll continue strong and very gusty, especially in coastal areas. Highest temperatures of 10 to 12 degrees. For more go to met.ie.

Work to do in the Kingdom

Kerry and Galway played out an entertaining game in Tralee. Are they Dublin's most likely challengers in 2020? @colmcooper13 and Colm O’Rourke have their say #LeagueSunday pic.twitter.com/i8YqDM2XAW

Kerry are still the closest pursuers to Dublin, and while you would have to them credit for they way they plundered both points against Galway last Saturday, numerous goal chances that went a begging for the latter did ultimately flatter them.

Pat Spillane believes Kerry need to find a Philly McMahon or Ryan McMenamin-style abrasive defender to stop the concession of soft goals that he thinks is the team's biggest weakness.

Speaking on this week's RTÉ GAA Podcast, he said: "When you run at the Kerry defence, particularly when you run down the centre... think All-Ireland final replay, Eoin Murchin running unopposed from the half-way line to score a goal.

"Fast-forward to the first round of the League. Brian Fenton cruising through to kick easy points against Kerry.

"Last Saturday night, what was really worrying me was the ease with which Shane Walsh ran through the centre of Kerry's defence, past two Kerry defenders with no hand laid on him, and scored a goal.

"Would the Dubs have allowed David Clifford to run from the middle of the field right through the centre of the defence? Would Tyrone have allowed him to do it?

"Kerry have lovely ball-playing defenders. They're very comfortable on the ball but most of them are probably natural half-backs rather than full-backs.

"We need a Philly McMahon or a Ryan McMenamin. A couple of teak-tough man-marking boys that will block that middle."

This weekend, the Kingdom head to Tyrone, for whom Cathal McShane looks set to be on board for the season ahead. Australian Rules side Adelaide Crows confirmed earlier this week that the player would not be "relocating to the other side of the world".

And McShane is now on the subs bench for the visit of the Munster side.

Meath are going to struggle. You need generally six points to stay up, so if they don't beat Mayo  next Sunday in Navan, they are in big trouble, says Colm O’Rourke #LeagueSunday pic.twitter.com/chCvLsKy5i

Elsewhere in the top flight, Donegal host Galway, while Mayo travel to Navan to take on a Meath side who have disappointed so far. A former Royal County great feels it's now a case of do-or-die in Round 3.

Indded, there was a lot to admire in their win over Armagh the last day.

Their next assignment is against Cavan, who bounced back to winning ways against Westmeath last weekend. 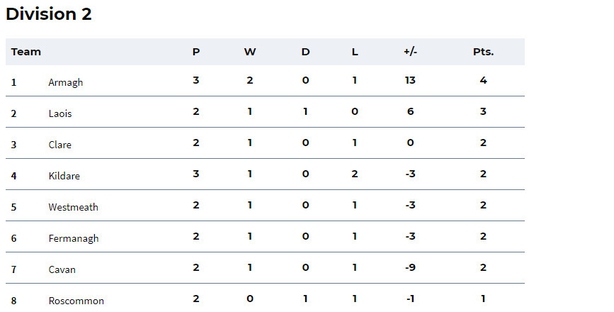 Clare, Westmeath, Fermanagh and Cavan are on two points after two games, with Roscommon bottom of the table on one point. The Connacht champions host Clare, whom they beat by 2-19 to 2-12 in Division 2 two years ago, on Sunday.

Westmeath and Fermanagh last met in the Allianz League in 2018 when the Leinster men won by two points in Division 3.

Cork were far too strong for Leitrim in Round 2. Next up is a home date with Down. Quite simply, Ronan MCarthy's troops want to ensure promotion as quickly as possible, then head to Croker for a divisional decider, before hosting Kerry in a mouth-watering Munster semi on 24 May.

Longford (3 points) host Leitrim (1 point) in what will be the first league clash between the counties since 2015 when they drew in Division 4.

Tipperary take on Derry in what will be the first meeting between them since the 2016 championship when Tipp won a qualifier tie by a point. Louth beat Offaly by two points in last year's Division 3 campaign. 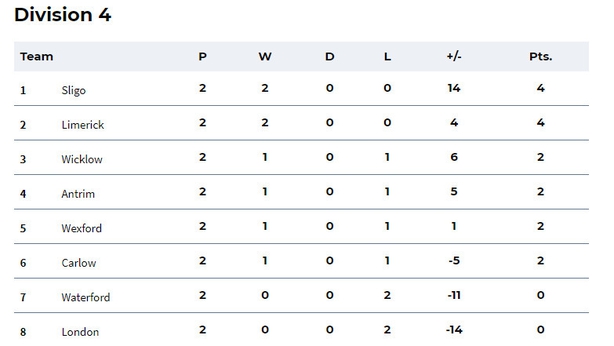 Sligo have put the misery of last year, when they failed to win any game, behind them and lead the bottom on scoring difference from Limerick after two wins.

Paul Taylor's men travel to Aughrim on Sunday to take on Wicklow, who have won one and lost one. It will be the first Allianz League clash between the counties since 2013 when Sligo won by four points.

The Treaty have started impressively, beating Waterford and London, but face a tough assignment away to Carlow on Sunday. Carlow beat Limerick by three points in the 2018 Allianz League. Antrim beat London by five points last year while Waterford beat Wexford by seven points.