An opportunistic goal from Dean Rock set All-Ireland champions Dublin on their way to their first win of the season in tonight's second round Allianz League clash at Elverys MacHale Park in Castlebar.

Rock’s audacious palmed effort in the 45th minute looped past Mayo goalkeeper Rob Hennelly and pushed Dublin into a commanding lead that they didn’t surrender.

Mayo had been forced to play with only 14 men from the 14th minute after Jordan Flynn was red carded by referee Barry Cassidy for a high challenge on Dublin’s John Small.

This numerical disadvantage left Mayo having to expend an awful lot of energy just to try and stay in the game, and Dessie Farrell’s new-look side gradually pulled away in front of a crowd of 15,148.

Man of the match Ciaran Kilkenny played an integral part in Dublin’s seventh successive victory over the Westerners, which means they have now stretched their unbeaten run against their old rivals to 16 meetings in all competitions.

Kilkenny’s ball-carrying and playmaking kept Mayo on the backfoot for long spells, and he also chipped in with a point for good measure.

Mayo, who are still hunting for their first win of the season, were left wondering if things would have panned out differently had Jordan Flynn not been dismissed after less than a quarter of an hour.

At that stage the homeside led by 0-3 to 0-1 with early scores from Aidan O’Shea, Diarmuid O’Connor (free) and James Carr easing them ahead. 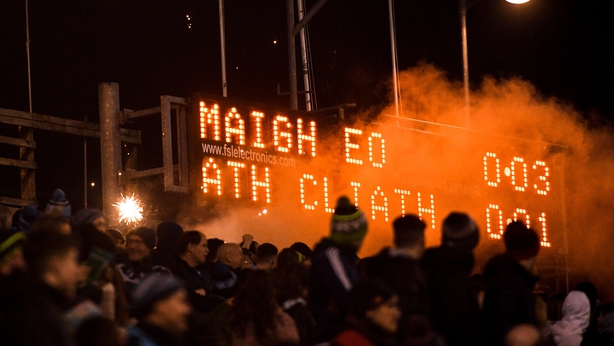 However, Dublin had got back on level terms by half-time (0-5 apiece) as they utilised the extra man and started to warm to their task.

A couple of unanswered scores from Dean Rock (free) and James McCarthy left the match all square as the teams headed down the tunnel.

The loss of Colm Boyle to injury at the break didn’t help Mayo’s cause either, and James Horan’s side went almost 25 minutes without a score either side of half-time as Dublin upped the ante.

The visitors rattled off a further 1-3 without reply in an impressive burst during the third quarter, with Dean Rick flicking Kevin McManamon’s delivery into the Mayo net from an acute angle for his second goal in a week.

Dublin then went six points up after John Small galloped upfield to score in the 51st minute, and from there to the finish the game was over as a meaningful contest.

Both sides emptied their benches and shared six points between them in the closing stages with the pick of the bunch coming from James McCarthy, Aaron Byrne, Tommy Conroy and Fergal Boland.

Dublin, who had also won on both of their previous three league visits to Castlebar, justified their pre-match favouritism with a typically efficient and businesslike display.

They didn’t register a single wide in the second half while Mayo clocked up ten in total.

This latest defeat means that Mayo’s last win over the Metropolitans remains the 2012 All-Ireland SFC semi-final.

Dublin will return to Croke Park next Saturday evening to face Monaghan while Mayo make the journey to Navan to take on Meath on Sunday.