Due to an outbreak of gastroenteritis at last weekend's double-header fixtures in Croagh GAA involving Limerick, Kerry and Wexford teams, the Camogie Association has made the decision due to player welfare to postpone all fixtures involving these sides this weekend.

As a result, Saturday's senior clashes between Galway and Limerick and Offaly and Wexford will now not take place. The latter fixture, however, has been refixed for Saturday 13 July. 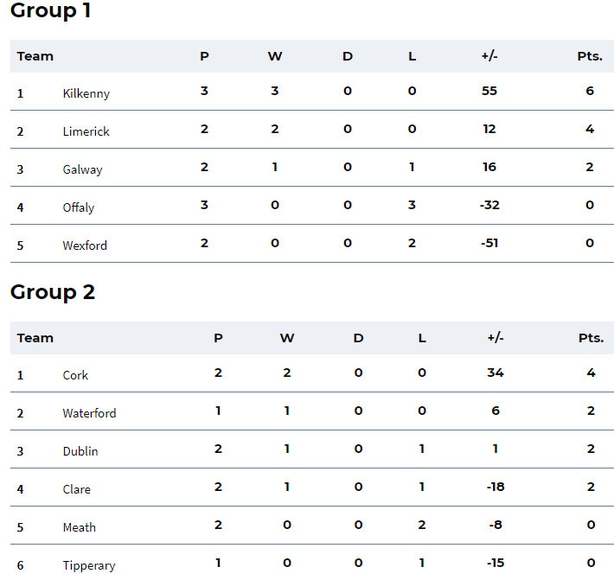 Highlights on The Sunday Game on RTÉ2, and the RTÉ Player, at 9.30pm on Sunday night.

Saturday night will be mostly dry with some broken cloud and a few spots of rain, drizzle and mist. Lowest temperatures of 7 to 12 degrees in light variable or northerly breezes. Sunday will be dull or cloudy with outbreaks of rain and drizzle but some dry periods as well. Top temperatures will range from 16 in the north to 21 degrees near the south coast in light variable or northwesterly breezes. For more see met.ie.

The Capital have had an indifferent start to the campaign so far getting off to a flying start with a victory over their Leinster rivals Meath in the opening round before falling at the hands of Waterford the following week.

They face another stiff task in taking on the current Champions Cork in round three who are following on their fine form this year.

The Rebels lie top of the pile and the only unbeaten team in Group 2 following on from victories over Clare and Tipperary respectively.

Both teams find themselves with two games played and one win under their belt so far as they go head-to-head in the third round fixtures.

The home side battled valiantly to get the win over Meath at the death two weeks ago but suffered badly at the hands of the reigning champions in week 1.

Meanwhile, Tipperary battled to a two-point win in a high scoring victory over Waterford last weekend so that momentum will be crucial this weekend.

Having received a bye last weekend Galway are back on home soil as they welcome an in-form Limerick team to the west of Ireland.

After suffering an early set-back in their opening round, they managed their first win against Offaly the following week, so a replica of that result is much needed to go back ahead of their opponents in the league table.

As mentioned Limerick come into this fixture on the back of good form, having picked up two wins from as many matches against Offaly and Wexford respectively so they will have no fear when they face their trip to the Tribeswomen this weekend.

As always, Niamh Mulcahy has been hitting points for fun so far and her threat will need to be at the forefront this weekend to ensure a positive result.

It's two defeats on the bounce for Meath who will be in desperate need of a win this weekend to get their Championship campaign back on track.

It was a tightly fought contest and despite only losing by the minimum to Clare, they can be proud of their performances so far.

Meanwhile, Waterford have already one win from their two fixtures having secured victory over Clare and falling short at the hands of Tipperary last time out.