Tipperary lead the way in the Munster championship standings with two wins from two following Sunday's win over Waterford.

Liam Sheedy's side had 18 points to spare at the end as they put a Déise side, who had Conor Gleeson sent off on the half hour, to the sword.

And while Sheedy was pleased overall with the performance, he did highlight a lack of discipline from his charges as an area of concern ahead of the eagerly awaited clash against Clare in a fortnight's time.

Speaking to RTÉ Sport, he said: "I’m very happy. It doesn’t guarantee anything obviously but it gets us another two points on the board. It’s nice to put back to back victories but it’s probably more important to put back to back performances together. We had the extra man for a long period of that game.

"With the way current players are conditioned, it’s very, very difficult to play 15 against 14. That probably gave us the edge. We got in those few points ahead.

"Full credit to Waterford, they brought us back to three points. It was concerning at the time because they were coming at us in waves. Once we got the goal it gave us that bit of breathing space and thankfully we pushed on for the finish line from there. 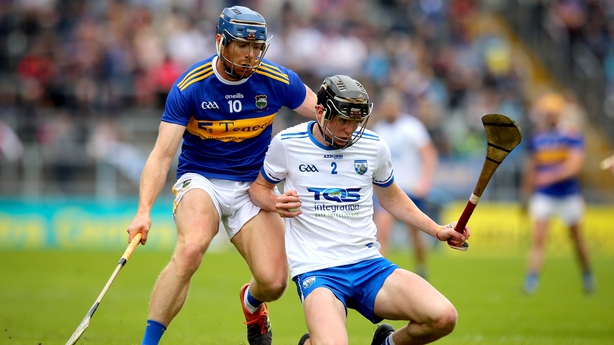 "Some of our scores were very nice scores. We had good contributions from all over the forward line and I think that's the important thing. We know it’s team effort. There are some aspects we wouldn’t be happy about. We conceded an awful lot of frees today.

"We let Waterford in at times with the [lack of] discipline we showed and they were unerring with frees. But overall it’s very pleasing to be sitting on four points two weeks into this championship, in what to me is the most competitive championship ever."

The Munster Championship takes a break week now before returning on 2 June with Waterford v Limerick and Tipp's trip to Clare.

Sheedy's men host the All-Ireland champions in Thurles on the final day.

"We know we have two massive challenges coming," he said. "Our focus shifts to Clare in two weeks' time. I’m very lucky, I have a great team around me and I’m facilitating a wonderful group of lads.

"I have great backroom team around me and they know exactly what is required to get these bodies back into shape.

"Recovery is a very important part but pitch time is important too. You could see today some aspects of play we are not happy on. We’ll get a chance to work on that on the training ground over the next two weeks and get ready for a massive challenge for us in two weeks time."