As @KilkennyCLG go up against @LimerickCLG this weekend; GAANOW Rewind takes a look as Henry Shefflin showcased much of his cleverness & technique to score this skilful goal for Kilkenny against Limerick in the #AllianzLeagues Final in 2006! pic.twitter.com/46OPLtj3uB

ONLINE
Live blogs from 7pm Saturday and 1.30pm Sunday, live scores and reports on RTÉ.ie and the News Now App

Saturday: Some mist or drizzle at times but most places will be dry during the day. Rain will develop along the west coast by evening. Mild and breezy with highs of 10 to 12 degrees in southerly winds.

Sunday: The morning will be wet for a time in all areas as rain spread eastwards across the country. Sunny spells and showers will follow for the afternoon. Highest temperatures of 10 to 12 degrees with fresh southerly winds.

But not the stricken Páirc Uí Chaoimh, which in addition to cost overruns - finally confirmed this week as almost €10m - has also had its pitch branded "unacceptable" by the GAA after cutting up badly during a recent double-header.

A pitch replacement is needed. It's not clear whether that will be before or after the summer but for the rest of the league, Cork will host their games in Páirc Uí Rinn (capacity 16,000), probably a better venue for spring-sized attendances anyway.

They and this week's visitors Clare have had differing trajectories since they last met in the 2018 Munster final.

Cork followed up that triumph by squandering a five-point lead in the semi against Limerick and have been beaten in all four outings in 2019 - two Munster League and two Allianz League clashes.

Clare earned great credit in their titanic draw and one-point replay loss to Galway and thumped Tipp in the Munster League final. The Premier men reversed that result in the first round of the League but Clare were impressive in beating Kilkenny last day out.

The Rebels will be happy enough for Clare to win this one if they can repeat last year's Championship double over their opponents, especially as relegation doesn't apply this season.

Still, another defeat to add to those against Kilkenny and Wexford will almost certainly rule them out of the knock-out stages, which have proven a useful pre-Championship tune-up in recent seasons. A win would be a welcome morale boost.

John Meyler must also plan without the services of promising young forward Declan Dalton after he underwent knee surgery.

The highlight of the weekend should be the visit of All-Ireland champions Limerick to League kingpins Kilkenny.

The natural expectation for a team that had just ended a 45-year wait for Liam MacCarthy might have been for them to show signs of rustiness in the early stages of the season.

But Limerick have hit the ground running and are the only Division 1A side with a 100% record after wins over Wexford and Tipperary. Another win would surely seal their place in the quarter-finals.

Kilkenny are one from two, having beaten Cork comfortably and pushed Clare all the way in defeat last week.

Victory over Kilkenny in last season's All-Ireland quarter-final helped to cement the self-belief in John Kiely's side that they were good enough to go all the way.

Brian Cody will be keen to test his evolving team against the champions in what should be a fascinating early-season signpost to the summer ahead. Expect sparks.

Meanwhile, Liam Sheedy will aim to get his Tipperary regeneration project back on track in Wexford Park.

Last year's League finalists were well beaten by Limerick last day out and will be up against a Davy Fitzgerald side high on confidence after a rare win in Cork.

2016 All-Ireland hero John McGrath is nearing full fitness and could be in contention to start for Tipp but Cathal Barrett, Barry Heffernan, Dan McCormack and John ‘Bubbles’ O’Dwyer among 14 injuries on the 40-man panel. Billy McCarthy, Conor Hammersley and Mickey Cahill are not expected to wear the blue and gold in 2019.

Stay away from that trap-door 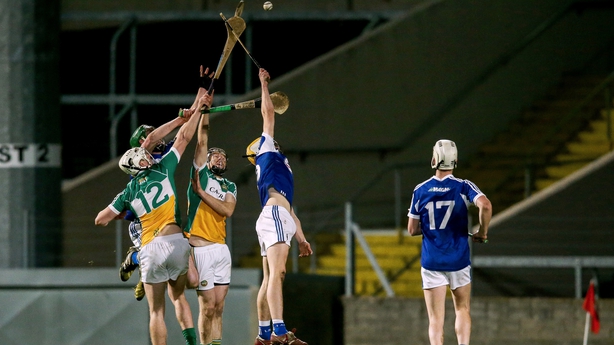 Relegation may not apply in the top tier but it remains a worrying reality in 1B and the loser between Laois and Offaly in O’Moore Park on Saturday night is surely destined for the play-off.

Offaly beat Laois by five points in last year’s campaign and Laois survived in 1B after beating Antrim in a play-off.

Carlow’s draw with Galway was the biggest surprise of the League campaign to date and now Colm Bonnar takes his squad to Dungarvan for a rare clash with  Waterford, who have won their first two games.

Former hurler of the year Austin Gleeson and fellow 2016 All-Star Jamie Barron are set to make their first starts of the season and even in the absence of the Ballygunner contingent it will be another big shock if Carlow can come away with a result.

Galway will seek to take out their frustrations from last week on a Dublin side they have beaten in Walsh Cup, Championship and League inside the last year.

Dublin have started well though, with five goals across the victories over Carlow and Offaly. Na Fianna man Donal Burke has scored 1-10 in a game in and a half.

The Tribesmen will be without the St Thomas contingent of David Burke, Eanna Burke and Conor Cooney for another month after they set up a club final date with Ballyhale.

Dublin boss Mattie Kenny's familiarity with his native Galway, he was a selector in 2011-12, adds a layer of intrigue. An away win here would be some statement.

In Division 2A ,Westmeath, who missed out on promotion to 1B last year after losing the final to Carlow, are setting the early pace in their bid to reach the top flight, having won their first two games.

Antrim, who dropped out of 1B last year, are equally focused on promotion and, after losing to Kerry in the first round, they got back on track with a win over Meath.

Their last clash with Westmeath was in last year’s Joe McDonagh Cup when the Leinster men won by two points.

Kerry, who lost to Westmeath in round two, have home advantage against Mayo, who were promoted from 2B last year. Mayo lost their opening game this season, while their round two meeting with London was postponed.  It’s a clash of the bottom two when Meath take on London in Trim.

The Lilywhites also feature the leading scorer across all divisions in Brian Byrne 4-19 (31)points).

Down and Wicklow are both on two points and will be hoping to make progress when they play Warwickshire and Donegal respectively. Warwickshire lost their first two games to Wicklow and Kildare by a total of 52 points.

Unusually, Armagh, Roscommon and Tyrone all won their opening two games in Division 3A while Lancashire, Louth and Monaghan have lost all their first two.

Tyrone will be fancied to maintain their winning run at home to Monaghan, who they beat by four points in last year’s campaign. Armagh, who dropped down from 2B, have yet to concede a goal in this year’s League,  pointing to defensive strength that they hope will enable them to beat Roscommon in the Athletic Grounds.

Having won their first two games, Sligo lead the way in Division 3B as they prepare to host Cavan, who have two points after winning their only game to date. Longford also won their opening game, while Leitrim and Fermanagh have both lost their two outings.