First up on St Patrick's Day at GAA HQ is the clash of the Galway and Cork champions. Between them they have nine All-Irelands, with Nemo accounting seven for those, the last of which was in 2003. Corofin have twice tasted glory on our National Holiday, with the latter victory coming in 2015.

The Galway kingpins were pushed hard in Connacht against St Brigid's and Castlebar Mitchels before a routine win over Fulham Irish in the All-Ireland quarter-final and a more testing clash with Moorefield saw them back in the decider.

Liam Silke, who missed out on playing for UCD in the Sigerson Cup final a month ago, was the hero for Corofin when he struck the decisive goal a minute from time to secure a 1-06 to 0-06 over the Kildare side.

Nemo Rangers bridged a seven-year gap to claim the Munster crown for a16th time as Luke Connolly scored ten points in their victory over reigning All-Ireland champs Dr Crokes at Páirc Uí Rinn at the end of November.

Three weeks ago. the Cork side went the extra yard when accounting for Slaughtneil in the last-four.

After last Sunday's defeat to Dublin, the footballers of Kerry will not be retaining their league title. To that end, Éamonn Fitzmaurice will look upon the final two games as a chance to continue shaping a new look to his Kingdom side, two months out from the championship.

Up until last weekend, Kildare, despite not picking up a point were most competitive in their games. Mayo, however, were more than comfortable winners in Newbridge in Round 5. Even a win for Cian O'Neill's side in Tralee and then at home to Galway in the last round may not be enough to keep them in the top flight.

Ronan McCarthy's Rebels need the two points to keep them on track for promotion, while the Banner could drop into the relegation places come late Sunday afternoon if they don't get something tangible on Leeside.

In last year's corresponding league fixture, it was Clare who prevailed by eight points in Ennis 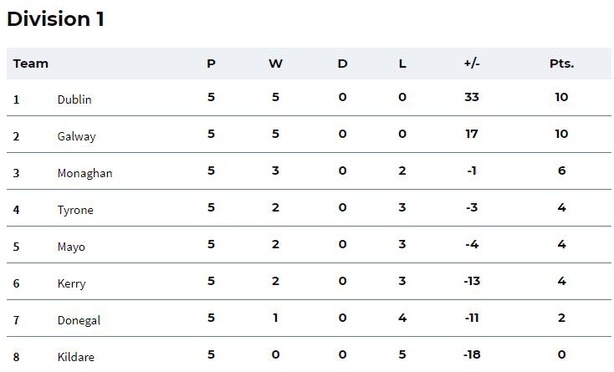 Galway are through to the Easter Sunday decider and Dublin will join them if they get at least a point in Salthill. It will be the first league clash between the counties since 2011 when they drew.

Monaghan still have an outside chance of making the final, but must rely on Galway beating the Dubs and they themselves accounting for Donegal and then Jim Gavin's troops in the final round.

Speaking of Donegal, a loss in Clones would edge them closer to the relegation trap door.

After crucial victories last weekend, Mayo and Tyrone know that another two points will probably keep them safe and so allowing to then fully focus on their eagerly anticipated opener in the championship.

Cavan and Roscommon, who were relegated from Division 1 last season, meet in a crucial game at Dr Hyde Park. A win for the Breffni would guarantee them promotion while success for the Rossies would not only keep them right in contention, it would also be a boost for Tipperary and Cork.

Tipperary make the long trip to Newry as they continue their strong bid to win promotion from Division 3 to Division 1 in successive seasons. Down (4 points) are only just clear of the relegation places, which are currently occupied by Louth (0 points) and Meath (3 points).

The Wee County, just up from the third tier, need to win their last two games to have any chance of avoiding the drop. Meath beat Louth by nine points in last year’s Leinster championship. 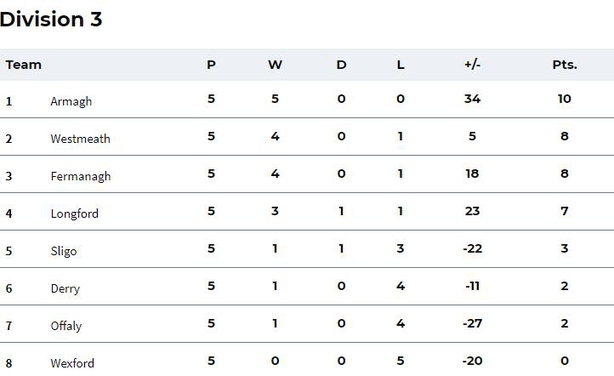 Having won all five games, Armagh are within touching distance of promotion, which they will secure if they beat Fermanagh (8 points) in Enniskillen.

Westmeath (8 points) and Longford (7 points) are also in the promotion mix, which makes their clash at Pearse Park of interest particularly if Fermanagh slip up again.

Wexford, who were promoted from Division 4 of the Allianz Football League last year, appear to be on their way back down after losing all five games so far. They head for Celtic Park to take on Derry (2 points), who are also in a relegation battle. That too applies to Sligo (3 points) and Offaly (2 points), who meet in Tullamore. 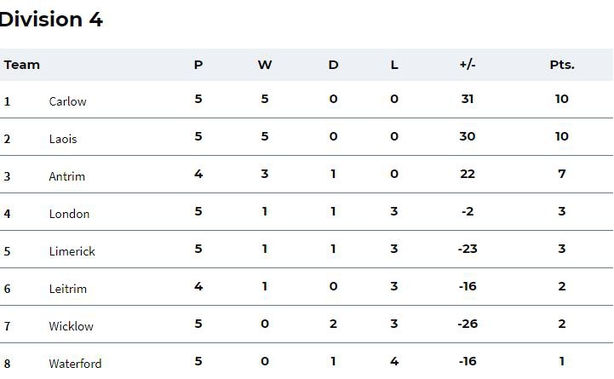 The clash of the Saffrons and the Barrowsiders will be crucial, with a win for the latter enough to ensure that they escape from the bottom tier for the first time since the 1980s.

Neither Laois or London are in action next Sunday.

Highlights of the weekend's action on Allianz League Sunday on RTÉ2 at 2130.

All live and deferred games on GAAGO.

St Patrick's Day will be a cold and windy day that will continue to get colder through the afternoon with scattered showers progressively turning more wintry. Highs of only 1 to 3 degrees in the eastern half of the country, 4 to 6 degrees in the west. Blustery easterly winds will add a significant wind chill.

Remaining very cold on Sunday with sleet and snow showers becoming more widespread for a time with some further accumulations. Showers will die out again later in the day. Northeast to east winds will be fresh to strong adding a wind chill to the afternoon temperatures of just 1 to 4 degrees. For more go to met.ie.