Former Mayo corner-forward Conroy, now a temporary resident of Tralee for work reasons, came off the bench in the counties' last championship meetings - the epic drawn semi-final and extra-time replay in 2014.

Veteran full-forward Kieran Donaghy, now 34, was inspirational for the Kingdom in those clashes, and remains a potent threat this season.

"Kieran Donaghy was excellent against Galway," Conroy told RTÉ Sport. "They found it very hard to curb him in the first half.

"He caused us a lot of trouble in the replay in 2014 down in Limerick and the first day he got the hand-off for James O'Donoghue's goal.

"That's huge, to try and curtail him, but he has two good corner-forwards beside him as well."

"When you have Paul Geaney, Kieran Donaghy and James O'Donoghue, three of the best inside forwards in the country at the moment, the key is to get the ball in quickly to them," he said.

"I'm really looking forward to the duel between O'Donoghue and Keith Higgins.

"In 2014, the two players were outstanding in both games, so that's going to be a great battle." 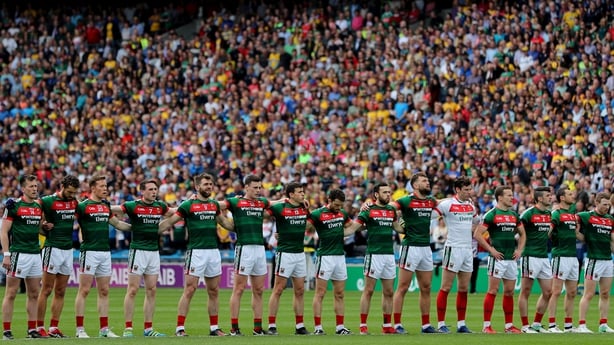 Five-time All-Ireland winner Ó Sé believes Mayo have grown in stature since Connacht championship exit to Galway and subsequent progression through the qualifiers.

"Mayo seem to have found the form that they had last year so Kerry are under no illusions that this is going to be a huge task.

"I've been critical of Mayo this year but since they've gone through the back door they've been faced with adversity and met that head on.

"They had a great performance against Roscommon in the replay, minus Lee Keegan, and they've had two weeks off.

Live coverage of Kerry v Mayo in the All-Ireland SFC semi-final on The Sunday Game, RTÉ Two from 2.45pm.

Live radio commentary on that game plus updates on Kerry v Cavan in the MFC semi-final on Sunday Sport, RTÉ Radio 1 from 2.00pm.

Live blog on the day's football action on RTE Sport Online and the News Now App from 1pm.