Dublin manager Jim Gavin heaped praise on All-Ireland final man of the match Michael Fitzsimons after the Boys in Blue retained Sam Maguire for the first time in 39 years.

Dublin ground out a 1-15 to 1-14 win over Mayo at Croke Park under floodlights at Croke Park on Saturday night. Mayo had chances to win this one, but weren’t able to take them, leaving the Boys in Blue in a position to retain their title.

Fitzsimons wasn’t in the team announced in the media in the build-up to the final replay against Mayo, but he started in the full-back line in place of David Byrne.

Before throw-in it looked like a big call, Byrne having played well in the drawn game a fortnight earlier, but it was fully vindicated with the Cuala man putting in a big display. 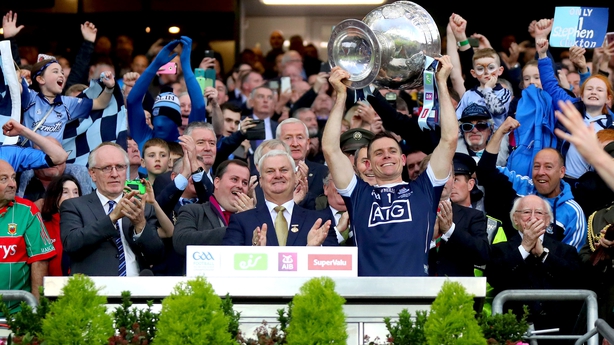 “He’s been playing well all season,” said Gavin. “David, Philly [McMahon] and Jonny [Cooper] were playing well in the full-back line, but he grabbed his chance with both hands and he played very well.”

Gavin named an unchanged side on Friday night, but there were three changes unveiled shortly before throw-in; Paul Mannion replacing Bernard Brogan and Paddy Andrews taking over from Michael Darragh Macauley alongside the Byrne decision.

The Dubs boss admitted they were hard calls to make and that it was difficult to break the bad news to the benched players, but he insisted that everyone accepted the decisions once they were made.

“They’re part of that culture system and they know that the team is the sum of its parts,” he explained.

We had faith in Cormac - he’s been outstanding underage, he had a dip, but he’s come back strong now

“They’re disappointed not to play, but once it’s explained to them they take it. Bernard came on and did very well, Darren Daly came on and deep into the game and got a match-winning block.”

Cormac Costello came off the bench too and popped over three vital points to ensure that the Dubs went though the entire season, League and Championship, unbeaten. In fact they’re now 29 games unbeaten back to 2015.

“Cormac has been playing well in training and those three points he got I could get you tape of training games and that’s the form that he’s in,” said Gavin.

“We had faith in him - he’s been outstanding underage, he had a dip, but he’s come back strong now.”

Mayo had chances to win this one, but weren’t able to take them, leaving the Boys in Blue in a position to retain their title.

Gavin insisted that each All-Ireland is different and refused to be drawn on whether or not his side are now listed amongst the greats of Gaelic games.