By Daragh Small at Carrick-on-Shannon

Six first-half points from Dean Rock saw Dublin to their seventh win of the Division 1 campaign on a 1-13 to 1-12 scoreline against Roscommon at Pairc Sean Mac Diarmada in Carrick-on-Shannon.

Roscommon were forced to forgo home advantage when Dr Hyde Park failed a pitch inspection at 9am on matchday, and after they settled into unfamiliar surrounding with a couple of quick points to take a 0-02 to 0-00 lead, they faded before half-time as Dublin kicked nine unanswered points.

Rock made sure of the win with a 56th minute goal for the All-Ireland champions, and despite a late goal from Senan Kilbride, Dublin held solid to become the first side for 24 years to win all of their round robin league games.

Dublin held a comfortable 0-09 to 0-03 half-time lead after they pushed Roscommon aside in the second quarter with some composed play, forcing frees and punishing their opponents time and again.

Roscommon hit the first two scores through Niall Daly and Ciaran Murtagh. At that stage they were finding space and causing trouble up front but that period of dominance came to an end.

Their discipline went first and they began to give away frees that Rock converted. He kicked Dublin’s first point in the 11th minute and tied the game up four minutes later.

From there Roscommon started to panic and Rock had taken his personal tally to six, as Dublin opened up a 0-7 to 0-2 lead.

Sean McDermott recieved a black card when he was adjudged to have hauled down Emmet O Conghaile and as Kevin McManamon and Shane Carthy tagged on further scores, the signs looked ominous for Roscommon.

The last time these sides met in the league was eight years ago, in Division Two, when Dublin hammered Roscommon 3-20 to 0-7, and they looked set to post a similar scoreline with their forwards in full flow.

Cathal McHugh was finding his feet up front and the youngster’s pick-up on the turn and assist for McManamon’s point was worth the admission fee.

Donie Shine got Roscommon back on the scoreboard in the 37th minute but it already looked too late as Roscommon trailed 0-09 to 0-03 at half-time.

Cathal Cregg got black just before the break when he tripped Paul Mannion, but despite losing two men in the opening-half Roscommon began the second-half better.

And when Ciarain Murtagh slotted his second point the deficit was back to 0-09 to 0-06. Rock eased the fears of a comeback from a Dublin perspective when he kicked a free in the 43rd minute but Roscommon had momentum.

Rock struck a goal in the 57th minute and that looked crucial, as he linked with the returning Eoghan O’Gara before he rifled to the net.

But Roscommon kept at it and Senan Kilbride landed their goal after Fintan Cregg’s effort dropped short. That left it at 1-11 to 1-08 in favour of the All-Ireland champions with 11 minutes left.

Eric Lowndes was black carded with six minutes remaining as Dublin began to wilt and substitute Conor Devaney brought it back to a single point, but Ciarain Murtagh missed a free with the last kick. 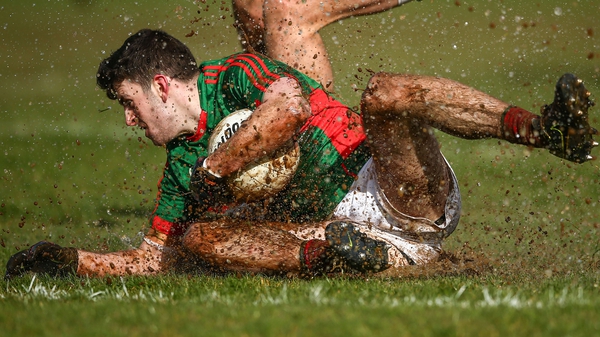