Dublin manager Jim Gavin has reacted angrily to suggestions that James McCarthy could be punished for an incident in which the defender's hand made contact with the eye of Donegal's Martin McElhinney.

McCarthy and Donegal captain Michael Murphy were both shown second yellow cards after a clash in the 51st minute of Dublin's 1-10 to 0-07 win at Croke Park on Saturday night.

Substitute McElhinney squared up to McCarthy in the aftermath and the Dublin defender pushed the Donegal man in the face.

Slow-motion replays showed McCarthy's thumb making contact with McElhinney's eye but Gavin said that to call it "malicious" was unfair.

James McCarthy may be in a bit of bother over this incident - thumb awful close to a Donegal players eye #DUBvDON pic.twitter.com/xjlo5bfgag

''I think that's a very strong allegation you're making there to me, particularly since I haven't seen the tape," he told Newstalk last night. "To be suggesting there was something malicious, I don't think that's very fair.'

''There are lots of incidents in the game, if you slow them down to the tenth of a second playback, things won't look as pretty as they would in real time.''

Gavin was happy with his side's response to the sending-offs, which saw them outscore Donegal by 1-03 to 0-01 in the closing stages to preserve their 100% Division 1 record.

"We were disappointed to lose James. He was playing well and he's a key player for us," Gavin told RTÉ Sport.

"To lose a player of his calibre can hurt a team but I thought the players rolled up their sleeves after that and showed good control and patience to finish the game out."

Donegal boss Rory Gallagher was understandably less than happy with how his men closed it out after the loss of their forward talisman.

"It had a big impact on the game but at the same time it's up to other people to step up," he said.

"They probably didn't and we'd be a wee bit disappointed with how we finished the game.

"It was nip and tuck up until about 55 minutes. Until they got the goal there wasn't a whole lot in it.

"At the same time I was pleased with the attitude of the boys. I thought they worked extremely hard."

At times on Saturday night there were 29 players inside the Donegal 45-metre line and Gavin said his players would have to learn to adapt to teams playing defensively against them.

"That's just the way the game has gone," he said.

"In Dublin we have a particular way we'd like to play the game, expressive football, but that's not the only way to play and if a team set themselves up to compress that space, we've just got to deal with it.

"There's no offside rule in Gaelic games, you can put your players where you want.

"Donegal have been very effective and had a lot of success playing that kind of system. They're certainly going to be in the hunt in the National League and the championship as well. 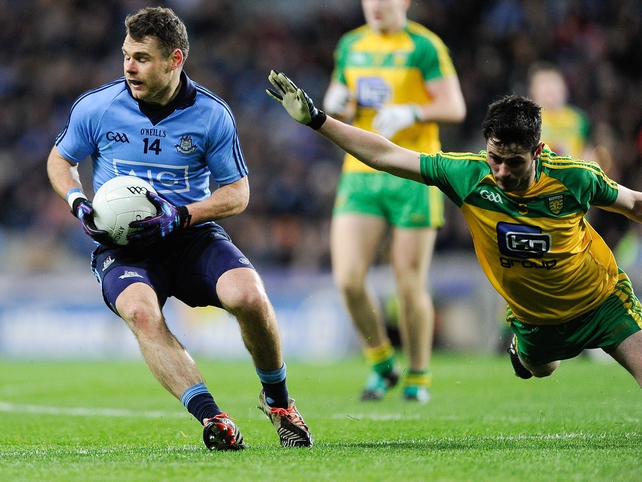 "I thought our boys had good grit and resilience and that we controlled the game for the most part.

"Donegal went ahead for a while in the second half and our guys showed good control and composure to stick with our process, the way we want to play our football.

"We eked out a couple of scores and finished comfortably in the end. To score 1-08 from play against a defensive system over 74 minutes, we're happy enough.

"To limit Donegal to seven points is probably testament to our good defensive structure. Overall, we're happy with the performance."

Gallagher revealed he had intended to employ a more offensive game plan but that the Dubs' roving defenders pinned his side back.

"We intended playing a couple of guys up the field but, the nature of the Dubs, Philly McMahon, Jonny Cooper and these boys join the attack, so my players aren't going to stand and not follow them," he said.

"We just need to work a bit more over the next number of months on our transition from defence to attack.

Donegal have now lost three consecutive games, to Dublin, Roscommon and Kerry, after starting the campaign with wins over Down, Cork and Mayo. Victory  in Monaghan next Sunday should be enough to secure a last-four sport, however.

"If we win next week, I think we'd have a great chance of making it (to the semi-finals)," said Gallagher.

"I'm disappointed we haven't picked up something over the last number of games but we'd be pleased overall with the league as a whole." 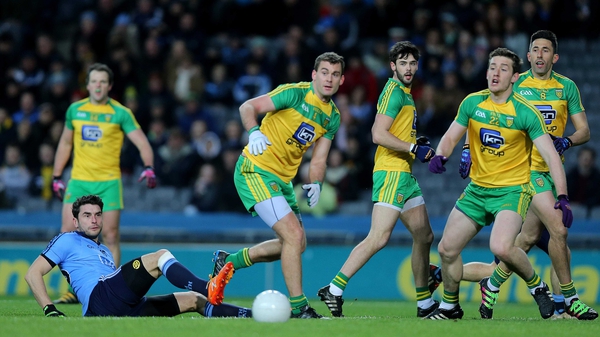