Dean Rock wants to add a clinical edge to Dublin's play in front of goal ahead of a meeting with Mayo this weekend.

The Dubs ran out six-point winners against Kerry last Saturday but were also guilty of missing good goal chances.

The sides were level at the break in Croke Park in the opening Allianz League game before the All-Ireland champions pulled clear with a two-goal salvo at the start of the second half.

Forwards Paul Mannion and Paddy Andrews stood out for the home side but there was some untypical profligacy from the All-Ireland champions during the 2-14 to 0-14 victory.

Next up for Jim Gavin’s men is a trip to Mayo on Saturday, who will themselves be looking for a response to a nine-point beating in Cork.

“Just next weekend against Mayo, hopefully we can execute a bit better,” Rock, who notched up seven points against the Kingdom, told the Irish Times.

“We work in a team to create scoring opportunities for each other on the pitch, and we managed to do that and that’s always been our emphasis.

“We did that (against Kerry) but we didn’t take as many as we would have liked. But the fact that we’re creating the opportunities is great, especially for this time of year when the ground is a little bit heavy.

"The fact that we’re creating the opportunities is great, especially for this time of year"

"So it’s definitely a positive.

“We played Mayo last year in the league and I suppose we put in a good performance that night up there. So we’ll be going up there trying to get the two points again, but it’s going to be difficult.

“They’ve got new management and that would bring a freshness to their group and a bit more eagerness and stuff.

“Certainly it’s a game we’re really looking forward to. That’s what’s great about the national league – you’ve got games nearly every week, and different things to work on and different opposition.

“MacHale Park will be a different surface to Croke Park, so that will bring a challenge in itself. And the travelling part of it. So it will be a completely different scenario.” 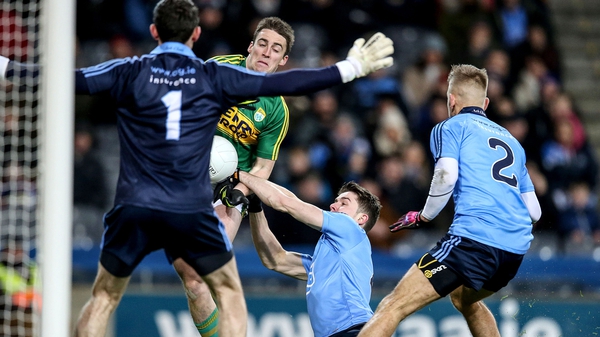