Paddy Andrews continued his fine recent form for Dublin with 1-04 at Croke Park as the three-in-a-row Allianz League champions got their title defence off to a strong start.

Andrews was one of Dublin's key players in their Bord na Mona O'Byrne Cup campaign which ended at the semi-final stage and took that form onto the big stage in front of 30,107.

The sides were tied at half-time in what was a repeat of last September's All-Ireland final but two Dublin goals after the break proved to be the difference.

Andrews got the first in the 43rd minute and Diarmuid Connolly slotted their second from a penalty, ensuring that Kerry suffered yet more capital punishment.

Four months or so on from last September's All-Ireland summit, which Dublin won by three points, their third consecutive win over Kerry in the Championship, both teams named relatively strong teams for the league opener.

Dublin had nine of their All-Ireland final team on show while Kerry had eight.

Paul Mannion started up front for Dublin having missed all of 2015 due to study commitments and the 2013 All-Ireland medallist burst out of the traps.

He scored a 10th minute point and generally gave Kerry's full-back line a tough time with his energy and clever running.

Dublin should have led by more too as Dean Rock's fifth minute point was a strong goal chance. Andrews was also denied by Kerry 'keeper Brendan Kealy while Dean Rock had a shot blocked on the line by David Moran.

Dublin's wasteful play cost them initially as Kerry came roaring into the game in the 10 minutes or so before half-time and tied the scores up.

Powerful Tommy Walsh started at midfield for Kerry but then moved in to full-forward and caused Dublin some trouble.

One of his catches led to a Darran O'Sullivan point and further scores from Donnchadh Walsh and free-taker Barry John Keane levelled it up at 0-06 apiece.

Mannion and Rock combined to set up Tomas Brady for a Dublin score in the 35th minute but Moran had the final say in the half for Kerry, hoisting over a superb effort to leave it 0-07 to 0-07.

Tommy Walsh got his first point in the 38th minute to cancel out an Andrews score for Dublin.

But it was all about Dublin from then on as Jim Gavin's side brought their quality and experience to bear on the contest, closing it out in some style.

Andrews got the goal he deserved in the 43rd minute when he fetched brilliantly from Diarmuid Connolly's high diagonal ball in, slipped away from Shane Enright and slotted home.

Connolly turned from creator to poacher eight minutes later when he converted a penalty for Dublin. James McCarthy won the spot kick after being fouled by corner-back Brian O Beaglaoich.

Kerry's full-back line struggled all evening and Rock turned his man to take his tally to four points for the evening.

Dublin had chances to net again late on but John Small and substitute Jack McCaffrey both hit the crossbar with vicious shots. 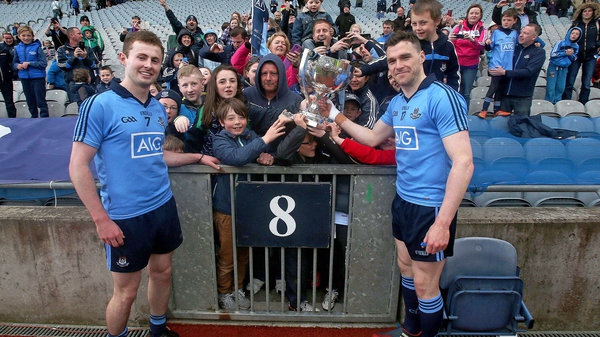 In focus: A look ahead to the Allianz Football League