All-Ireland champions Kerry held off a second-half comeback by Tyrone to win an engrossing semi-final contest by 0-18 to 1-11 at Croke Park and book their place in the decider once again.

A 60th-minute penalty goal from Peter Harte brought the Ulster side back within a point after Kerry had pulled clear and though Mark Bradley levelled shortly after, the Kingdom’s class told as they scored the final four points to secure victory and shake off the hex Tyrone have had on them at this venue.

Kerry had led by a single point at the break, 0-08 to 0-07, without ever hitting top form as the rain lashed down on Jones’ Road.

Eamonn Fitzmaurice’s side ditched a malfunctioning direct approach for the second period and that paid dividends as substitute Paul Geaney inspired them to victory, but Tyrone were left to rue a series of missed goal chances and some debatable decisions that went against them.

The sides were evenly matched in a first half that was a clear contrast of styles, Tyrone sitting deep – 14 men back when not in possession – and running the ball on the counter, while Kerry repeatedly kicked it in towards their full-forward line.

Tyrone’s tactics seemed to better suit the sodden conditions and Kerry were left frustrated as their stellar full-forward line were dispossessed time and again by a swarm of defenders in white.

Kerry skipper Kieran Donaghy was a particularly peripheral figure and, despite claiming a fine catch and point just before the break, he was replaced by Geaney at the interval.

Though lacking in fluency, Kerry still looked slightly more potent in attack in the first half, Johnny Buckley scoring four points from play as they settled into the game following a furious start from the underdogs.

The sides exchanged points throughout the opening 35 minutes, Ronan McNabb getting forward for an excellent score for Tyrone and Niall Morgan kicking a sublime sideline free off the ground after Marc O Se was shown a 15th-minute black card for dragging down Conor McAliskey.

Kerry recovered from the shock of losing the three-time All-Star to settle and push ahead however, with points from James O’Donoghue and Stephen O’Brien.

It could have been a different story if Conor McAliskey had spotted the free Darren McCurry in the 25th minute. McAliskey went for glory himself after intercepting a loose Kerry handpass but blazed over the bar when a goal seemed on. 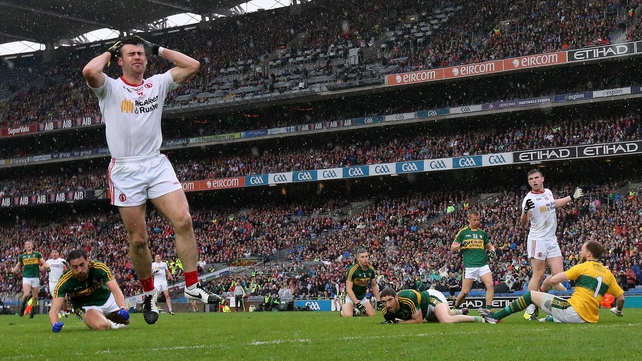 Kerry adapted their tactics in the absence of Donaghy and reaped instant rewards from working the ball in more patiently, although McAliskey levelled shortly after the restart, the Munster champions scored the next three points through Colm Cooper (two) and Geaney.

All of a sudden, Tyrone were forced to chase the game, and Kerry were content to retain possession and win frees.

They led 0-14 to 0-09 by the 54th minute after Ronan McNamee was black carded for a foul on Cooper and O’Donoghue converted the free.

In between, Tyrone had missed two big goal chances.

Kerry keeper Brendan Kealy produced a superb save to deny Bradley before Tiernan McCann, booed throughout by the Kerry fans, swiped a loose ball on the ground just wide.

Colm Cavanagh settled Tyrone with their first point in almost 15 minutes before Shane Enright was very lucky to be shown a yellow card rather than a black card for what looked a blatant drag down.

On the hour, the Red Hands were back in the game.

Substitute Barry Tierney was hauled down in the square and Harte sent Kealy the wrong way from the penalty, stroking the ball into the corner of the net.

The Tyrone crowd, who significantly outnumbered their opposition, found their voice and when Bradley tied it up in the 62nd minute, they looked to have the holders rattled.

Wides from placed balls by McCurry and Morgan proved hugely expensive though, as Tyrone failed to raise another flag and they were left shaking their heads in disbelief when Maurice Deegan booked substitute Padraig McNulty for a dive with four minutes to play - a penalty for a foul by Aidan O’Mahony seemed the better call.

Points from Anthony Maher, Geaney and sub Barry John-Keane closed it out in style for Kerry, who march on to their ninth All-Ireland final in 12 years, where they will attempt to win back-to-back titles for the second time in a decade. 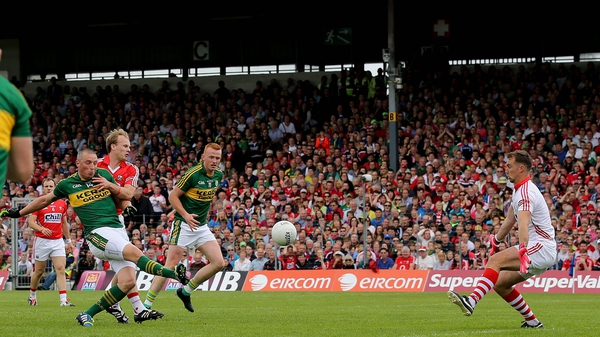