Monaghan’s inability to bring good Ulster form into Croke Park has continued as their interest in the 2015 All-Ireland championship was brought to an end by Mickey Harte’s Tyrone at headquarters.

Monaghan never got to grips with the challenge and while there was not much between the sides for over half the game, the Ulster champions were nearly always chasing.

But once again they failed to deliver and instead it is Tyrone who advance to an All-Ireland semi-final showdown with champions Kerry.

Monaghan finished with 13 men with Darren Hughes and Paul Finlay were sent off in the closing stages, while Tyrone lost Ronan McNamee to a second yellow during a fiery conclusion.

There was a huge Monaghan crowd in Croke Park and they were given plenty to cheer about in the opening minutes as Malachy O’Rourke’s men recovered from the concession of a first minute free from Conor McAlisky to edge in front with excellent points from play by Kieran Hughes and Dessie Mone.

But Tyrone were, as always, patient in building attacks and Joe McMahon timed his run perfectly to take possession and level the sides after five minutes.

Tyrone then lost McMahon to a leg injury and he was replaced by his brother Justin.

They pushed on from there to lead by 0-04 to 0-02 after 10 minutes thanks to a brace of points from Darren McCurry, the first from play and the second from a free.

Fintan Kelly went forward to kick a good point for Monaghan but O’Rourke’s men were struggling to deal with Tyrone’s congested defence.

They did not score again for the next 16 minutes despite enjoying plenty of possession asTyrone were disciplined in defence and did not concede scoreable frees.

McAliskey put two between them with another free but then Tyrone lost Conor Meyler to a black card after referee Marty Duffy judged that he had brought down Kieran Hughes after clearing the ball after 22 minutes.

But Peter Harte put three between them when he went forward to kick a fine point before Conor McManus, starved of possession, finally responded for Monaghan five minutes from the break when he went out to the right wing and landed an excellent score. 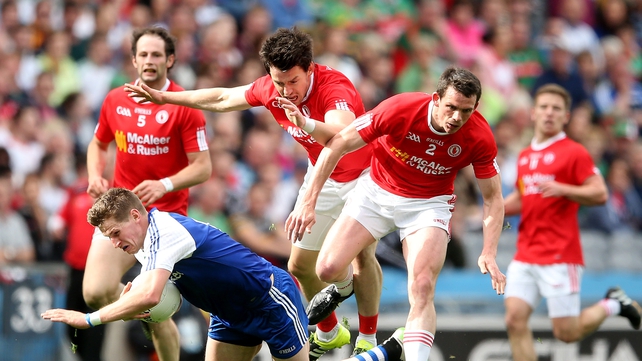 Sean Cavanagh must have been relieved to receive only a yellow card for a high tackle on Neil McAdam, while Tyrone goalkeeper Niall Morgan was also booked just before the break after tangling with Kieran Hughes.

In between, McManus reduced the margin to two points with a free, with Monaghan regretting a long free and 45 from goalkeeper Rory Beggan which missed the target as Tyrone went in leading by 0-07 to 0-05 at the interval despite having just 41% of the possession.

Monaghan manager O’Rourke brought in Dick Clerkin, Drew Wylie and Owen Duffy at the interval but it was Tyrone who started the second-half on top.

McCurry and McAliskey hit points and then McCurry converted a 45 after 41 minutes for Tyrone to lead by double scores by 0-10 to 0-05.

The game was slipping away from Monaghan though McManus showed good leadership to land a couple of frees, but Tyrone again pulled clear with points from McAliskey and the superb Cavanagh putting them 0-12 to 0-07 after 48 minutes.

Substitute Duffy brought Monaghan back into contention with fine points from the right but in between Ronan McNabb went forward to score for Tyrone.

Man of the Match McCurry put five between them with 19 minutes left and with Monaghan not looking like they would a way through for a goal, it really was only a matter for Tyrone of keeping daylight between them.

McManus gave Monaghan hope with a point from play but that wasn’t long being extinguished as McAliskey and Ronan McNamee pointed for Tyrone.

Monaghan managed to get the gap back to a goal during a stormy finish but Mattie Donnelly wrapped it up for Tyrone with his second point of the match in the dying moments.