Rarely has the prospect of Division 2 football provided so much intrigue as the new Allianz League programme gets set to throw in this weekend.

The ingredients are all there – two provincial champions, one of those a team deemed by many to be best equipped to deal with Kerry, a three-time All-Ireland winning manager, the longest-serving football manager of the same team and a series of matches that look impossibly tough to call.

That's before we even mention the fact that the retention of Division 2 status come April greatly increases a team's chances of competing for Sam Maguire in the overhauled All-Ireland championship. That is not to say that avoiding relegation to the third tier is 100% protection against Tailteann Cup participation. More on that later.

One of those two provincial champions, and the side who will be targeting honours much greater than a Division 2 title are, of course, Dessie Farrell's Dublin who fell through the trapdoor last March after Jack McCarron’s late free provided salvation for Monaghan but condemned the Leinster men, who last played outside the top flight in 2008, to relegation.

While Division 2 should be littered with close encounters, Dublin’s participation in those are expected to be fleeting at best. Cork in 2020 were the last side to win seven from seven in the league, the Rebels achieving that feat in Division 3, and that’s a very attainable target for Dublin. At times, they played some brilliant football in a highly-competitive recent challenge game with Armagh.

It’s now three seasons since Dublin lifted Sam Maguire, a veritable famine given how successful they have been since their modern period of domination began in 2011 [eight titles in 10 years for the record] but they have enjoyed a good off-season.

Firstly, Farrell quashed the not so quiet rumours that he was stepping away from the role by agreeing to a two-year extension back in August.

Then came the double boost that Jack McCaffrey and Paul Mannion, who have just the seven All-Stars between them, are back on board for the 2023 season.

Mannion made a unexpected start for Kilmacud in their All-Ireland Club final win over Glen on Sunday. The fact that he looked off the pace, not surprisingly given his long injury lay off, and that the Crokes won the title, means that he may get the first few rounds off.

He should be back certainly in time for the round five meeting with Derry where some Kilmacud and Glen players will come face-to-face once again after their thrilling club final battle.

Oakleaf manager Rory Gallagher has the job of lifting his Watty Graham contingent off the floor after the disappointment of that defeat, but other than that things are looking rosy for the current Ulster champions.

Last year they ended a 24-wait for an Ulster title with an extra-time win over Donegal and they went on to bring great colour to Croke Park as they crushed Clare in the All-Ireland quarter-final before they were undone by Galway in the semi-final.

Just four seasons ago they were playing Division 4 football, but on Monday RTÉ Sport pundit Peter Canavan was stressing why they, along with Armagh, are on course to become one of the big two in the province.

January provided more evidence that they will be no flash in the pan as they annexed the Dr McKenna Cup. Their final destruction of Tyrone felt like a message being delivered, even if it's still the opening skirmishes of the season.

They’ll ease the Glen contingent back in slowly. Conor Glass is the new captain, but there are serious doubts about whether or not his club midfield partner Emmett Bradley will recommit. Even in his potential absence,they look best placed to join Dublin in the promotion spots.

Louth were in Division 4 more recently than Derry – just two seasons ago – but the appointment of three-time All-Ireland winning manager Mickey Harte has had the desired impact with back-to-back promotions.

Like Derry, Louth reached their pre-season final, but unlike Derry, it has been anything but plain sailing.

Controversy surrounded their decision not to play their O’Byrne Cup fixture with Wexford having already qualified from the group. Harte argued that they did not withdraw and Leinster GAA had been made aware of their plans from the off.

In turn, Offaly conceded their scheduled semi-final with Louth, Faithful boss Liam Kearns taking a few shots at the Wee men in the process, before Harte fielded a weakened side that was ultimately well beaten by Longford in last weekend’s final.

That drama will be quickly forgotten when their league campaign starts with a trip to Clare on Sunday. A round seven trip to Croke Park to face Dublin is a real sign of the progress made, but if the Wee County go there without their safety already guaranteed then realistically it will be a short stay in the second tier.

Facing Harte on the sideline at Cusack Park will be the longest serving inter-county manager of the same team in the game.

When it comes to league stability, Clare have been one of the market leaders over the last number of years.

The Banner County are preparing for their seventh straight season in the second tier, and all of those under the tutelage of Colm Collins who confirmed back in September that he is back for a 10th season with the side.

He has shaken up his backroom team after Derry hit them for five goals in last year’s All-Ireland quarter-final, and the most interesting addition is Mark Doran who will be getting to know some of those same Oakleaf players very well as he is expected to be appointed Slaughtneil manager in the very near future.

The Down man was joint manager of Ballybay last year, guiding them to the Monaghan title with the management team making headlines in the Ulster series as his partner in crime, Jerome Johnston, opted out against coaching the side against his native Kilcoo.

They will have to do without one of their best ever players as David Tubridy announced his retirement this month – and has since joined The Sunday Game pundit panel – but every season Clare are deemed as relegation fodder and every year they exceed expectations. They should find a way once again.

The 'dark horse’ moniker for Division 2 is likely to be placed on the shoulders of Cork.

These have been lean years for the Rebels, but there is an air of recovery about them now and the fact that they have four home games shouldn’t be underestimated either. The plans of the Rebel camp can’t be known for sure, but six points from home games with Meath, Dublin, Limerick and Derry sounds like the sort of target they will be setting.

The addition of former Galway manager Kevin Walsh to John Cleary’s coaching ticket looks like a real find too.

The McGrath Cup proved a useful exercise in confidence boosting as they hammered a Kerry second string, defeated Clare and were too strong for Limerick in the final, Brian Hurley and Steven Sherlock both hitting seven points in the 0-19 to 2-07 win.

New Limerick boss Ray Dempsey would have taken heart from their battling qualities in the final with his side producing some strong periods of play either side of Cork dominance, but they face a real battle to survive in Division 2.

Half-forward Cian Sheehan produced a brilliant January portfolio but they will need all their players at the top of the game to get anything from their trip to Derry this weekend. That's followed by the visit of Dublin. A tough few weeks await.

The final acts in Division 2 come in the form of Leinster neighbours Kildare and Meath who are in that sweet spot of offering their fans hope and trepidation at the same time.

The Lilywhites were relegated from Division 1 last year but they weren’t out of their depth as a win over Dublin and draw with Kerry suggested. It was their one-point loss in Tyrone that would have irked the most as they missed a series of great chances in that game and, when all was said and done, a point in Omagh would have been enough for safety.

Dublin away is the hardest start possible, and playing catch up in this division is no easy feat.

Promotion will be a key aim for Glenn Ryan’s side, but there are a lot of strong teams in this division and another year in Division 2 may be the most likely outcome.

Meath, under the new management of Colm O’Rourke, are another side hard to pin down.

Their O’Byrne Cup draw with Laois, albeit a pre-season game, showed up some of their promise, and also their issues.

They dominated for long periods with Cillian O’Sullivan starring, but at one stage Laois managed seven points from eight and finished with the final six points to force the draw.

O’Rourke used over 30 players in their three games in pre-season and has indicated that he thinks the league should start a month later than it does. That suggests that it could be an experimental start to their league season, and a trip to Cork is a testing opener.

A word of warning for the Royals. Third tier Westmeath are already guaranteed a spot in the All-Ireland race after their 2022 Tailteann Cup success, as are the top two teams in Division 3. The championship draw in Connacht means that London, Sligo, Leitrim or New York will be in the top competition too despite playing in the lower divisions.

A number of Division 2 teams may end up needing a run to their respective provincial finals to stay in the Sam Maguire race.

Division 2 round one fixtures 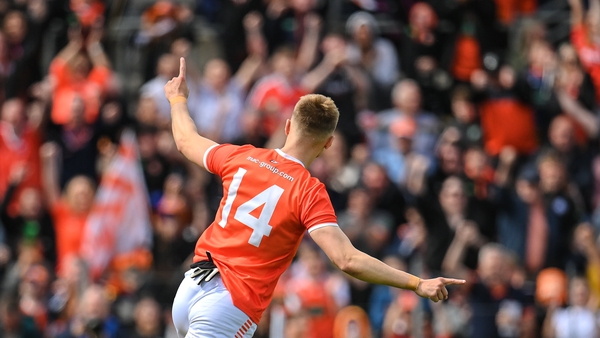