On the first Sunday of last September, Meath won their first ever All-Ireland senior title when they beat the all-conquering Dublin team in the final.

Fast forward to this weekend and Meath have the chance to do it again, only Kerry stand in their way from completing back-to-back titles.

Kerry won the last of their 11 All-Ireland ladies senior titles in 1993. Only Cork match Kerry's haul. The Kingdom have been in one final since, where in 2012 they lost heavily to neighbours Cork.

Will the Kingdom join their male counterparts as All-Ireland champions or will the Royals continue their reign?

We looked at how both sides made it to Croke Park on All-Ireland final day.

Eamonn Murray’s side continued their ground-breaking form by winning their first ever Ladies National Football League Division 1 crown in April.

They beat Donegal in the final at Croke Park, a place where they are becoming accustomed to winning.

They did however lose to Dublin in the Leinster final back in May after beating them in the round robin stage.

Here is how they overcame the Leinster final lost to reach another All-Ireland final.

Meath got their All-Ireland title defence underway with a routine win in Drumhowan against a young Monaghan side.

The Royals conceded the first score of the game, which proved to be Monaghan’s only score as the visitors dominated the game.

In the full-forward line Stacey Grimes hit 0-08 while Kelsey Nesbitt found the net in the first half.

There were always going to be tougher tasks to come for Meath, but as wins go this was an emphatic way to start the campaign.

Meath drew with Armagh in Longford’s Pearse Park to secure their place in the quarter-finals.

The Royals needed a late Orlagh Lally point to get back on level terms, they had trailed by two points with ten minutes left but a strong finish from Meath helped them earn a draw.

Aimee Mackin continued her impressive season, hitting 0-05 for Armagh, four of those coming from play.

Meath showed their resilience throughout the game, as they were never in front against an impressive Armagh side.

Meath needed a late winner from the ever reliable Emma Duggan to thwart Galway’s comeback.

Duggan hit 1-02 in Tullamore to help keep Meath’s title defence alive, the sides were level just after the break as Galway’s Olivia Divilly kicked one of her three points.

In the final quarter, Meath led by five points and a place in the semi-finals looked secured but a late flourish from Galway got them back on level terms with minutes to go.

Extra-time was looming until up stepped Duggan, who split the posts with just seconds left on the clock to give Meath a victory.

Meath’s resilience was to the fore again as the win set up a semi-final against Donegal, a repeat of the league final.

Meath booked their place in the All-Ireland final with a win over Donegal, as once again Emma Duggan inspired her side to victory.

Niamh McLaughlin scored from the penalty spot to give Donegal a half-time lead of three points, 1-03 to 0-03.

Yet again Meath had to show resilience and they kicked nine points in a brilliant second half display.

The defending champions came flying out of the blocks in the second half and they raced into a three-point lead of their own before Donegal got their first score of the half.

Donegal fought their way back into the game and found themselves back on level terms late in the game.

Emma Duggan then took the game by the scruff of the neck, kicking three scores in the final ten minutes of the game to send Meath into the All-Ireland decider.

Stacey Grimes also impressed kicking 0-05, with four of those coming from frees as Meath continued their winning run at Croke Park.

It has been nearly 30 years since Kerry last got their hands on the Brendan Martin Cup, having lost only one final in that time, is it now time for Kerry to complete the football double?

Kerry got their season up and running beating Armagh in the Division 2 final at Croke Park.

The Kingdom lost to Cork by five points in the Munster final at the end of May in Fitzgerald Stadium.

Fast forward a few months and Kerry are back in a final at HQ.

Here is how they got there.

Kerry got their championship campaign underway with a victory against Galway in Birr.

Louise Ní Mhuircheartaigh kicked eight points in Kerry's win, as the Kingdom were able to hold on for a crucial win.

Kerry led by three at the break, 1-06 to 1-03, but they got two quick goals at the start of the second half to give themselves a big lead.

Galway fought back bravely, but in the end they ran out of time against the 13 players of Kerry after Lorraine Scanlon and Ní Mhuircheartaigh were shown yellow cards.

Kerry raced into a 1-05 to no score lead inside the opening quarter at Fitzgerald Stadium in Killarney.

The Kingdom never looked back and they confirmed their progress into the quarter-finals as Group C winners.

The win set up a quarter-final date with Armagh.

Ní Mhuircheartaigh was to the fore again, scoring 2-06 to seal Kerry’s semi-final berth,

Ní Mhuircheartaigh’s second half penalty and a Siofra O’Shea goal just after half-time gave Kerry the impetus to be able to overhaul the deficit.

Armagh’s Aimee Mackin once again showed her prowess hitting 0-11 in a losing effort in Tullamore.

The Kingdom had nine different scorers in the game, and they progressed to the All-Ireland semi-final.

Kerry's blistering opening half gave them a 3-06 to 0-08 point lead at the break, which was always going to be out of reach for Mayo.

Mayo had opened the scoring through Shauna Howley but that was as good as it got for the Mayo side.

Aishling O’Connell and Paris McCarthy both also found the net for Kerry in a perfect outing for the Kingdom.

The win gave Kerry a place in just their second All-Ireland senior final since 1993, setting up the decider against holders Meath.

Kerry joint-managers Declan Quill and Darragh Long have quickly changed the fortunes of the Kerry ladies side, while Eamonn Murray’s side are looking to continue their fairy-tale ride.

Will Louise Ní Mhuircheartaigh and Emma Duggan be able to continue their heroics in the final?

Kerry are looking to become the most successful team in the ladies game while Meath are hoping to keep their hands on the Brendan Martin Cup for another year, it is set to be a classic. 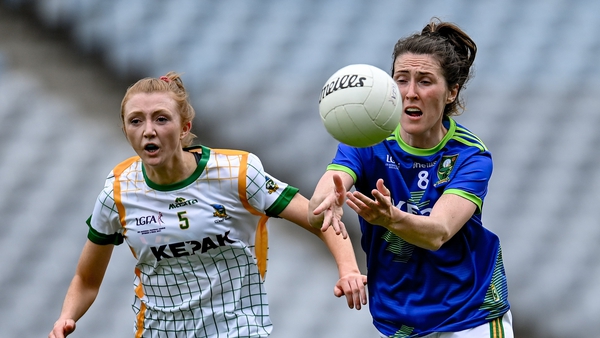