Declan Bonner's decision to start Michael Murphy at the weekend may have appeared "strange", but the logic was sound, despite the disappointing consequence, according to Eamonn Fitzmaurice.

The Donegal captain was substituted during his side’s 2-25 to 1-12 victory over Down on Sunday, an early exit to his 50th consecutive championship outing for the 2012 All-Ireland winners.

Murphy, who had a hand in four of Donegal’s first six scores before going off injured shortly before the half hour mark, signaling some discomfort with the hamstring injury he has been dealing with for the last five weeks since coming off in a league match against Monaghan.

Bonner said afterwards the talismanic forward "tightened" up during the win - "I don’t think he has done any extra damage" - but some have questioned the wisdom in playing the Glenswilly man with bigger challenges ahead, starting with Derry in an Ulster quarter-final.

However, speaking on the RTÉ GAA podcast, former Kerry manager Eamonn Fitzmaurice said that while the decision to start Murphy appeared "strange" he understands the rationale behind it.

"You have to look at Declan Bonner and Donegal’s mindset," he said. "The last time they played in the championship they were defeated in an Ulster final they were expected to win.

"No more than Kerry losing to Cork last year, they were going to be making sure they were winning that game, and picking their strongest team to do so."

More importantly despite the perceived risk in playing Murphy, Fitzmaurice says from his own experience, no such risk is taken. If the player isn’t fit, he doesn’t play.

"He must have come through all the testing, all the protocols. They would have built up his training gradually. There would have been one-on-one stuff, further conditioning, then contact football, so he was obviously good to go because for me, those decisions are black and white. You are either fit or you are not.

"There’s no half-way house anymore at that level.

It was a strange one, but I understand why Declan Bonner did what he did

"Whatever the back story, it’s step-back for Michael Murphy and Donegal. Even psychologically for Michael Murphy, this is the most enjoyable part of the season, those two-week blocks, training, recover, get ready for the next game. You are top of your game.

"If you are rehabbing is the least enjoyable part of any athlete’s life. You could see that in him afterwards

"It was a strange one, but I understand why Declan Bonner did what he did." 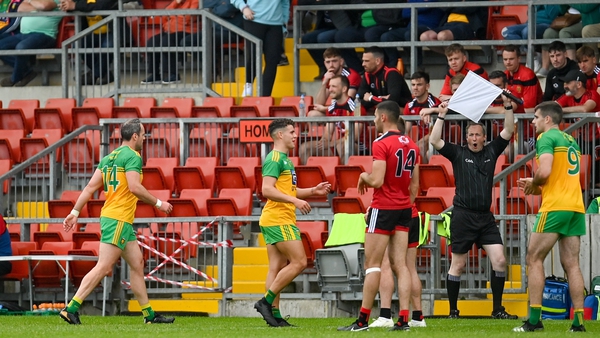