Mayo remain joint-top of Allianz Football League Division 1 after they dismissed Derry's challenge by 2-12 to 1-13 at Celtic Park.

The visitors led 1-07 to 0-06 at half-time, their goal being finished to the net by Mark Ronaldson after Cillian O'Connor's 29th-minute free had hit the post.

When Sweeney netted, the Connacht champions led by 2-12 to 0-13 after they had been pushed to the pin of their collars throughout the second half.

Breeze at their backs, Derry fought gamely and produced their best display of the league. But every time they got a foothold, Mayo pushed them away.

The Oak Leafers built up a head of steam, led by the introduction of substitute Kielt, and hit four points on the spin to pull themselves level at 0-13 to 1-10.

But the next two scores crucially went to Pat Holmes and Noel Connelly's side. Kevin McLoughlin's searing pace took him away to rifle over before he pointed a free.

Derry reacted furiously to its award, as they did to a number of referee Ciaran Branagan's decisions. Brian McIver certainly did not hold back in his scathing assessment of the Down whistler's performance.

Branagan doled out two black cards when the game was almost over – the second of them to Kielt for dissent – but various other offences went unpenalised in the opening 65 minutes.

Mayo's transition from defence to attack was fluid and sharp.

They posted Aidan O'Shea inside again in the first half and he proved an able ball winner, notching two scores from play for himself before the break.

Assisted by the wind, they punished Derry mistakes with their direct counter-attacking style. However, they were aided largely by a stroke of luck for their first goal.

The Oak Leafers' attacking performance was vastly improved from previous performances and they worked an opening for Sean Leo McGoldrick. His left-footed effort fell short and Michael McIver got his fist to it at the far post, but his effort came back off the bar.

The second period took a while to warm up but Derry found their groove and got themselves level.

But in the end, the absence of Fergal Doherty from their midfield told as Mayo were able to win ball at the crucial times.

Sweeney's goal was enough to keep them level with Cork and set them up for a Dublin side that need points just as much as Derry did.

With trips to Dublin and Monaghan to come, McIver's hopes of survival are dangling by the thinnest of threads. 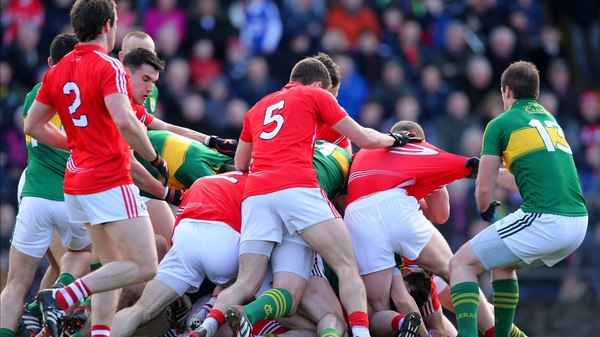 As it happened: Sunday's Football League