Darren McCurry converted a stoppage-time free to earn Tyrone a point in the Ulster derby in the Allianz Football League Division 1 at Healy Park as they finished deadlocked at 0-11 to 1-08 with Derry.

Terence O’Brien fired in a late goal to put the Oak Leafers in front, but the home side fought back with three late scores after Derry full-back Niall Holly was booked for a second time.

The game only went ahead following a lengthy pitch inspection by referee David Coldrick, who was concerned by a number of patches of standing water, following heavy rain earlier in the afternoon. 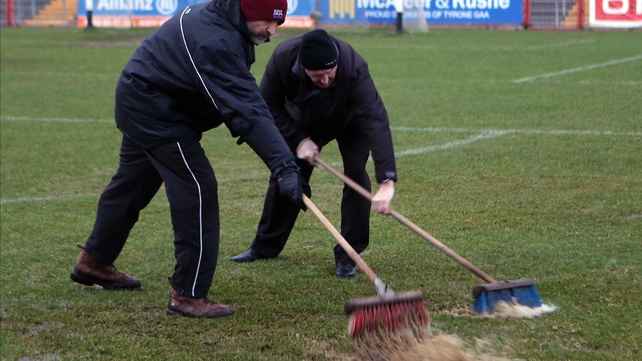 Derry, playing with the driving wind and rain in their backs, failed to score until the tenth minute, when Eoin Bradley, making his first start in two years, converted a free to cancel out Colm Cavanagh’s early effort.

Tyrone, setting up with an ultra-defensive system, routinely had all 15 men stationed inside their own 45 metre line, suffocating their opponents’ efforts to carve scoring opportunities.

And it was the Red Hands who went in front on 20 minutes when Connor McAliskey sent Sean Cavangh in for a point.

But scores from Carlus McWilliams, whose long-range effort hopped over the bar, and Bradley, had the sides level by the half-hour mark. 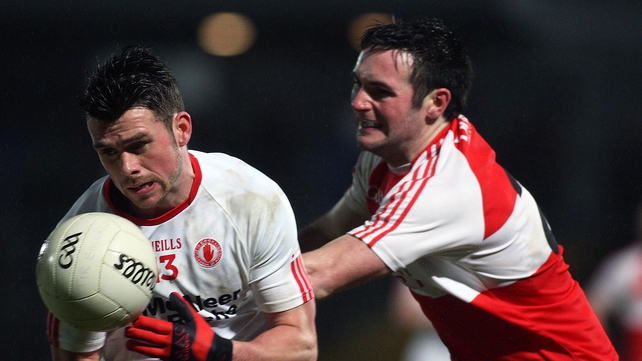 Sean Cavanagh’s free sent Tyrone in with a 0-04 to 0-03 interval lead, but Derry began to find holes in the Tyrone rearguard after the restart, going level at the end of the third quarter, after substitute James Kielt had arrowed two frees between the posts and Benny Heron had found acres of space to slot over the equaliser.

Tyrone were struggling to break down an Oak Leaf attack that had Dermot McBride and Sean Leo McGoldrick in terrific form, and it was no surprise when they fell behind to McGoldrick’s 62nd-minute point.

And a minute later the Red Hands were stunned when Emmet McGuckin sent Terence O’Brien in for a low finish to the net.

Derry lost full back Holly to a second booking, and in the closing stages, with a touch of desperation but immense courage, Tyrone battled back with four late points to earn a draw.

Mattie Donnelly and PJ Lavery were on target, before McCurry held his nerve with a crucial free three minutes into stoppage time. 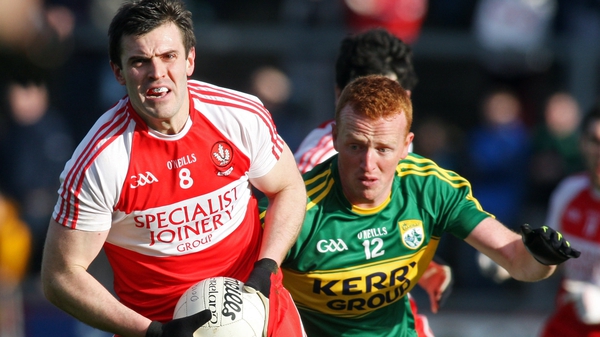