Cillian O'Connor's 50th-minute goal looked to have settled a sloppy Mayo, but Peter Harte finished off a good Tyrone move with a goal nine minutes later to make sure of the win.

Darren McCurry got Tyrone off to a good start in the first minute with a point that came straight from Donal Vaughan's attempt at goal dropping short at the other end, and Cathal McShane doubled their advantage two minutes later with a good point on the turn.

Seconds later Mickey Conroy had a great chance cleared off the line by Cathal McCarron after the Davitts man had nipped in ahead of Niall Morgan, but the home side soon got off the mark when Jason Doherty tapped over a free after a foul on Colm Boyle.

Tyrone were happy to filter men behind the ball as soon as they lost possession, so Mayo were often facing a blanket defence of 13 men, which occasionally changed to every white shirt behind the ball.

Consequently, the Mayo turnovers began to mount, and after Mattie Donnelly punished Aidan O'Shea's disposal with a point at the other end, Sean Cavanagh made it 0-4 to 0-1 with a 12th-minute free.

But Tyrone were not error-free either. Goalkeeper Morgan was robbed of possession near halfway after he was allowed to wander upfield and Mark Ronaldson benefited with an easy score, but after Conroy put just a point between the sides in the 15th minute, Mayo had to wait 21 minutes for their next point.

In that time Tyrone landed four points, including two long-range frees from Morgan, but they were aided by Mayo's shocking handling, shooting and passing which bedevilled the second quarter.

Tyrone full deserved their 0-8 to 0-4 half time lead and added to that when Donnelly and McCurry found the target.

Mayo were unlucky to lose Aidan O'Shea to a black card following a collision with Morgan in the 50th minute, but they were lifted moments later when Cillian O'Connor goaled four minutes after his introduction.

That score put just two points between the sides, but Tyrone continued to be more ruthless in front of goal and once Peter Harte finished to the net from close range Mickey Harte's men eased to the win. 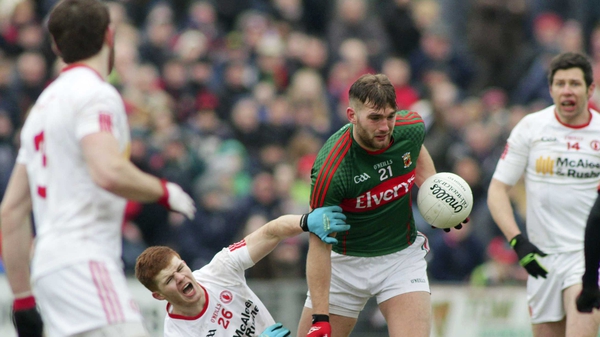