Paul Geaney hit a majestic 1-05 from play as All-Ireland champions Kerry coasted to a 1-17 to 0-13 Allianz League win over Derry at Celtic Park.

The Kingdom were never behind in this entertaining Division 1 tie and led 0-10 to 0-07 at half-time.

Derry captain Mark Lynch was given a straight red card in the 51st minute and Kerry, helped by Geaney's accuracy, romped to a comfortable victory. Bryan Sheehan was also unerring from placed balls, hitting 0-07 in all.

Kerry picked up their first league points of the season in what was their first ever appearance at Celtic Park, with Geaney's goal coming from a cool finish in the 61st minute after a mistake in the Derry defence.

Geaney and Stephen O'Brien kicked points inside the first minute to put Eamonn Fitzmaurice's men ahead and although Derry drew level twice during the opening half, the Kingdom had their noses in front for most of the game.

With little penetration in the full-forward line, Derry were restricted to long-range points and Gerard O'Kane, sweeper Daniel Heavron and Ciaran McFaul all landed sweet scores from distance.

Tommy Walsh, starting his first game for Kerry since the 2009 All-Ireland final, started at wing forward and switched to full-forward before being taken off early in the second half.

Kerry had a strong second quarter and Jack Sherwood ran 50 metres straight through the heart of the opposition's defence to chip the ball over the bar with Stephen O'Brien and Barry John Keane also on target as the visitors coasted to a three-point half-time lead.

With no scores from their full-forward line, Derry brought on Eoin Bradley for the start of the second period and he gave them a physical presence up front and kicked four frees.

His brace early on brought the Oak Leafers back to within a point, but Kerry responded with Geaney stroking over points off either foot.

Derry were trailing 0-13 to 0-09 when Lynch was dismissed for a high elbow tackle on Jonathan Lyne in the 51st minute, but it looked a harsh call.

Initially, Derry rallied, scoring the next two points with frees from Bradley and Ciaran McFaul.

However, Kerry outscored the home side by 1-04 to 0-02 over the closing 14 minutes with the goal coming after a slack pass across goal by Niall Holly.

The ball was recycled out to Johnny Buckley who fed Geaney and his low curling finish clinched a solid away success for the reigning All-Ireland champions. 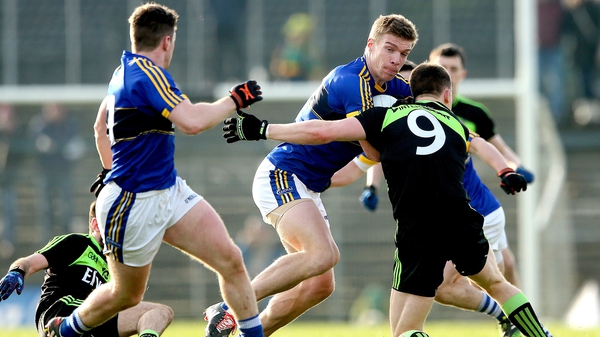