Kevin McStay has tipped Kildare to get the better of Meath and so advance to a first Leinster SFC final appearance since 2009.

The Lilywhites and the Royals open up proceedings at Croke Park on Sunday, with Dublin taking on Wexford in the second of the provincial semi-finals.

However, Meath's growing injury list is the key factor in determining who will prevail, according to McStay.

Speaking to RTÉ Sport, the former Mayo star said: "Meath’s injury list is killing them. Eamonn Wallace and Conor Gillespie are out and now they’ve lost their free-taker Michael Newman.

"I would have said Meath in the build-up but it has swung dramatically now with that injury list. It’s Kildare for me.

Turning to the clash of Dublin and Wexford, McStay summed up the way Jim Gavin's troops deal with the opposition.

"[Dublin have] an hour, 50 minutes of preparing the dish and the last ten to 15 minutes taking them out," he said.

Unsurprisingly, McStay was not offering much hope of a Wexford surprise on Jones' Road this weekend.

“I’m afraid it’s damage limitation for Wexford. Getting within seven or eight points of Dublin would be the target," he said.

"Dublin are taking their own motivation from within. That’s the only way they can progress; they are so far ahead of the Leinster pack."

Looking ahead to the other football games over the weekend, McStay expected Monaghan to reach a second consecutive Ulster final.

"Everyone seems to be in agreement that Monaghan are the team of the year so far. They are an impressive outfit after winning Division 2 and taking out Tyrone the last day," he said.

"Armagh have players suspended and that’s really going to hurt them.

"If Monaghan stop Jamie Clarke, they will definitely win it. If Clarke plays well, Armagh have a chance. However, adding all things up it has to be Monaghan."

What of the four qualifiers?

"A few weeks back [we Carlow would] be hammered. Unfortunately, they were [against Meath]. They’ve taken a lot of criticism since.

"They might improve but they won’t improve enough because Waterford have had two good shots at Clare. Waterford aren’t bad at all and will win.Two teams here playing for pride."

"I thought Cavan were really going to take on this championship full on but lost out to Armagh. Westmeath were really poor against Louth and they’ve had injuries and defections since.

"It’s never good when players head off to the USA the minute they’re beaten. Cavan are going to win this game. They are at home which will help them. They’ll get back up on the horse and I expect Cavan to improve as the year goes on."

“This is a tough draw for Louth. I thought they were going to have a good shot at the Leinster championship.

"Tyrone are decent enough and were close enough to Monaghan the last day. That can’t be forgotten. They are tweaking their team again as I think they don’t know their best team.

"They’ll be way too good for Louth."

"Similar to the messing going on in Westmeath with defections, Down are in a similar boat with fellas on holidays and going to America. That never looks good.

"They have, however, got lucky with the draw in that it’s Leitrim at home.

"Leitrim have gone back an awful lot. They were average against Roscommon. Last year, they were hammered in the qualifiers [against Armagh}.

"They won’t be hammered on Sunday, but they’ll be well beaten." 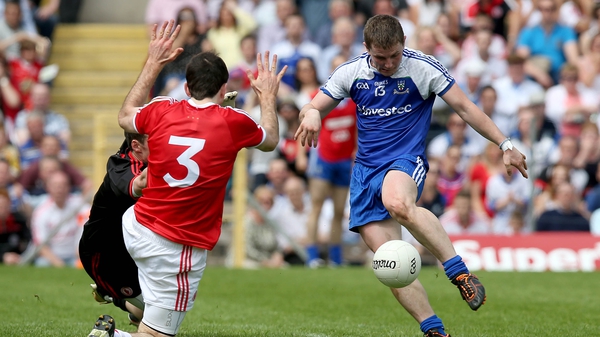 Padraic Joyce: Monaghan have the perfect blend after deserved victory over Tyrone