Quite simply Ulster is the most competitive of the provincial football championships and ahead of this year’s renewal you would have to say that as many as six counties have a chance of winning it.

Cavan, Derry, Donegal, Down, Monaghan and Tyrone are in that sextet. Barring a draw, one of the aforementioned will have exited the race come Sunday evening at the conclusion of the Tyrone v Down preliminary round clash in Omagh.

RTÉ pundit Kevin McStay expects Mickey Harte’s men to prevail and reckons they will have a big part to play in the destination of honours in the months ahead.

He said: “It’s a great match to launch the championship formally. My read is, it’s going to be Tyrone in the end - but not without the usual Ulster dogfight.

"If they play to their potential Tyrone will win handy enough

"Tyrone are a serious outfit and that’s seems to be lost on a lot of people. They came very close to eliminating Dublin in the league. They are a young, pacy and skilful side.

"On paper they have an outstanding full-forward line in the shape of Darren McCurry, Niall McKenna, Kyle Coney.

"If they play to their potential Tyrone will win handy enough. Also they’re at home and that’s a huge plus"

"With Kevin McKernan back, Down will be competitive but it won’t be enough.

"Tyrone will have a huge say in Ulster and probably a big say nationally.

McStay also gave his thoughts on the rest of this weekend’s football games.

“It’s a derby. Leitrim will tog strong and they’ll come with great hope and expectation.

“However, this is a big game for Roscommon in terms of the squad’s development.  They haven’t had a championship win for a few years.

“They have a strong team named; are Division 3 champions and they’re going well.

“What they need to do on Sunday is perform and win the game fairly well. After that it’s about building towards Mayo.”

“This is an attractive fixture in its own right. It will be a competitive game; both teams are well-matched. Yet, you would have to say that these teams aren’t going to have a big say in Leinster. That’s just the way it is!

“Both teams suffered relegation in the league, so they are not in the best of form coming into it. Westmeath are at home and if you have the home venue I’d generally give the team the nod.

“Throw in John Heslin, Denis Glennon and Dessie Dolan and Westmeath will probably have enough. However, don’t rule out a Louth win either. It will be really tight. “

“I was in Aughrim last year. You may remember that Meath had a really good year, but Wicklow came within a freaky goal of beating them. They are hard to beat in Aughrim

“They don’t have enough to make a big impression in Leinster . Can they beat Laois? They probably can in Aughrim.

"You would have to think that Laois with the likes of John O’Loughlin, Padraig McMahon and Donie Kingston around that they should have a bit too much for Wicklow.

“An away win on this occasion, but not without a massive fight."

“Not a whole lot to be said for it. It’s a peripheral championship game between two teams that aren’t going so well.

“Longford have the likes of Sean McCormack up front and they should be able to get the score to see them home."

Listen to live Radio coverage of all of Sunday's Championship action including Ulster SFC Tyrone v Down (Sunday 18 May, RTÉ Radio 1 and RTÉ.ie, 2pm). 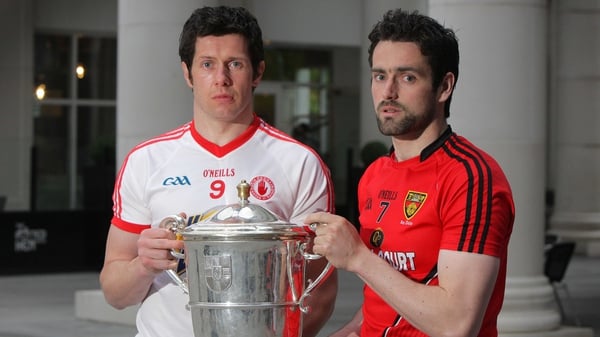