Derry showed incredible grit to survive an early red card and secure their Allianz Football League final spot with a 2-15 to 1-16 win over Mayo at Croke Park.

The Oak Leaf men grabbed the game’s first goal through Cailean O’Boyle but suffered what looked a potentially fatal double-blow in the 23rd minute as Fergal Doherty was sent off for a second yellow card and Andy Moran found the net for Mayo.

Derry fought back to lead by a point at half-time however, 1-8 to 1-7, and though Mayo used their extra man well in the early stages of the second half and pulled three clear, they couldn’t put the determined Ulster men away.

Derry made 13 changes from the experimental side that lost heavily in Castlebar last Sunday, while on the Mayo side Shane McHale came in for flu victim Tom Cunniffe.

Mayo burst out of the blocks to take an early lead through Alan Freeman (free) and Aidan O’Shea but Derry found their feet and a lovely point from Emmett McGuckin tied things up at three apiece after 12 minutes. 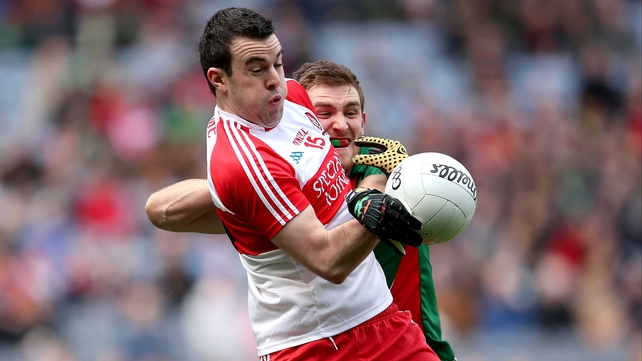 Derry’s forwards were looking lively and some nice interplay between Lynch, O’Boyle and McGuckin gave O’Boyle the chance to plant a low shot past Robbie Hennelly into the bottom corner of the net.

That pivotal moment of the first period came 10 minutes later as Doherty, already on a harsh yellow for a foul on Jason Gibbons, hit Aidan O’Shea with a late frontal charge out on the sideline.

Referee Padraig Hughes played on, and Kevin McLoughlin and Mickey Sweeney broke for Moran to finish with ease, Hughes returning to send Doherty off after the ball was in the net. Mayo one up 1-04 to 1-05

Lee Keegan got his customary score from half-back and Sweeney added another but Derry shrugged off the loss of Doherty and McGoldrick and Lynch fired over points for a slender half-time lead.

Derry fans would have feared playing the entire second-half a man down and Mayo, as expected, reasserted their dominance - Jason Doherty hitting two points, including one that flew just over the bar, as they went three points clear.

Johnston’s goal revitalised Derry though, and though Alan Freeman kept knocking over dead balls for Mayo, the underdogs’ self-belief shone through.

With echoes of last September’s All-Ireland final, Mayo were left needing a goal from an injury-time 20-metre free but Moran’s shot flew over the bar and Derry deservedly advanced to the final. 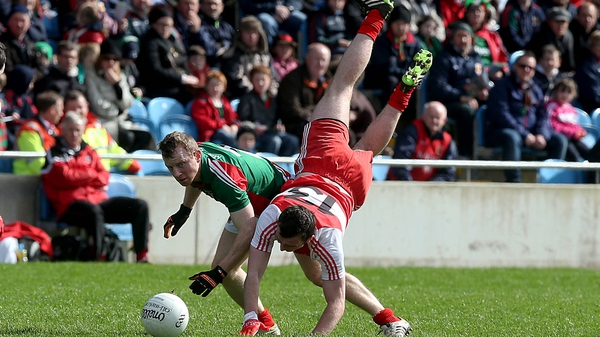