Tyrone led for most of the first half, but Tommy Conroy’s 30th-minute goal sent the westerners in with a 1-04 to 0-06 lead.

They made an explosive start to the second half with a 1-04 salvo, including a Darragh Doherty goal.

The Red Hands narrowed the gap to three with points from Lee Brennan and Conor McKenna, and despite McKenna’s late goal, Mayo held on to win, with Conroy and Doherty bagging 1-02 each

Liam Irwin converted three 13 metre frees in the opening quarter, punishing sloppy tackling each time the Red Hands to their noses in front.

Midfielder Ronan Nugent thumped over two long range scores for the Ulster lads, who were never behind during the opening 29 minutes, but they were fortunate not to have a penalty awarded against them when Tommy Conroy was dragged back as he went for goal following an incisive raid involving Stephen Coen and Conor Loftus.

Frank Burns, operating as a sweeper, broke up a series of Mayo raids, but the extra man at the back allowed the Connacht champions to work short kick-outs which were a platform for many of their attacks.

Eddie Doran made a couple of timely interventions at the back for Mayo as the Red Hands threatened along the left flank, but they opened up a two points lead through skipper Ruairi McGlone in the 24th minute.

Mayo sensed the danger, and after Irwin had arrowed over a superb free, they got in for a 30th minute goal.

Wing back Michael Hall pushed forward and slipped a pass to Conroy, who skipped past two defenders before unleashing a wicked shot. Goalkeeper Sean Fox got a hand to the ball but couldn’t prevent it from flying into the top corner of the net. 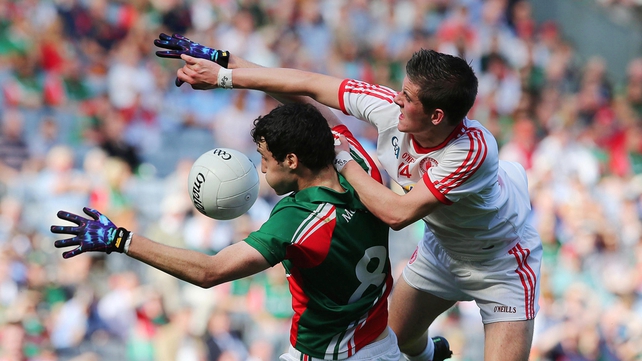 That score sent the westerners in with a 1-04 to 0-06 lead, and they made and explosive start to the second half, hitting 1-04 inside the opening eight minutes to put themselves firmly in control.

Darragh Doherty helped himself to two sumptuous points, and in the 38th minute, grabbed his side’s second goal.

The corner forward slipped in behind the cover to collect Coen’s pass and drill a low shot past Fox for a massive eight points lead.

Shell-shocked Tyrone managed to compose themselves for Brennan and Daire Gallagher to clip over frees, and they adopted a more offensive approach, trimming back the deficit with scores from substitutes Philip Donnelly and Cathal McShane.

When Brennan slotted his fourth point in the 49th minute, just a goal separated the sides.

But Mayo steadied the ship, and an excellent Loftus scores was followed by another from Conroy as the noise levels around Croke Park rose with the arrival of legions of additional supporters ahead of the senior game.

Enda Gilvarry’s side pushed for home with scores from Conroy and Conor Byrne, undeterred by McKenna’s last gasp fisted goal.

Highlights and analysis of all the weekend’s action on The Sunday Game from 21:30 on Sunday 22 September on RTÉ Two and RTÉ.ie (Worldwide). 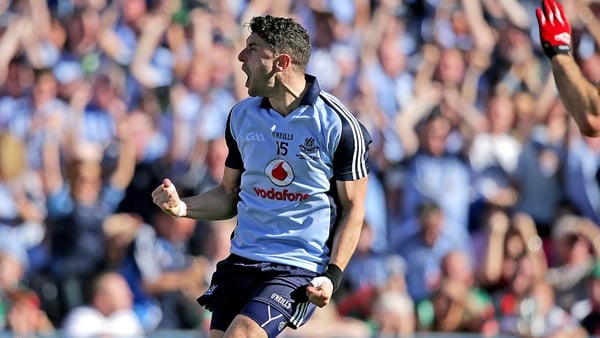