Kerry had little difficulty in seeing off 14-man Tipperary as this runaway 2-19 to 0-08 victory sent them through to the Munster SFC semi-finals.

James O'Donoghue and Paul Galvin helped Kerry open up a 0-11 to 0-04 half-time lead at Fitzgerald Stadium.

The result was all but confirmed by O'Donoghue's 36th-minute goal and the dismissal of Tipp's top forward Barry Grogan.

This provincial opener lacked atmosphere and intensity as Kerry, shooting 2-15 from play with 11 players on target, claimed a facile win in Eamonn Fitzmaurice’s first Championship match at the helm.

Peter Creedon’s Tipp side, gunning for the county’s first Munster SFC success since 2003, struggled in defence and were far too reliant on placed balls - only Philip Austin and defender Ciaran McDonald managed to score from play.

Johnny Buckley, making his first Championship start, launched an attack straight from the throw-in that saw Cooper open the scoring after barely 15 seconds. 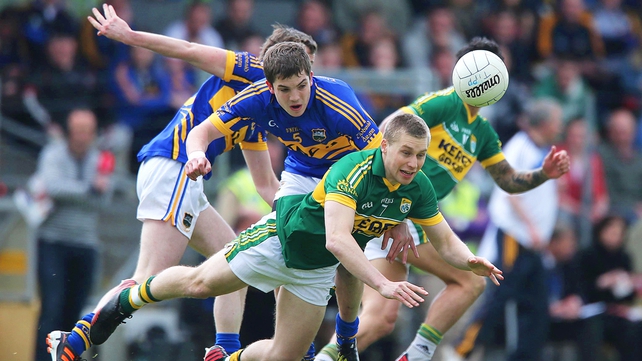 The red-haired midfielder added a quick second point from a close-in placed ball, as Tipperary struggled to make use of an early wind advantage.

Kieran Donaghy played in O’Donoghue for a possible goal-scoring chance, although the speedy corner forward elected to send a rising shot over the crossbar.

Grogan, who was in free-scoring form during the Allianz League, got Tipp off the mark with an 11th-minute free but, as O’Donoghue struck Kerry’s third wide, the lacklustre nature of proceedings was glaringly obvious.

Some neat interplay between O’Donoghue and Donaghy led to the former’s second point of the afternoon, the move being set in motion by a Marc Ó Sé interception at the other end.

Grogan, moments after tussling with Marc Ó Sé off the ball, floated over a well-struck ‘45’ only for Killian Young to raid downfield and create the opening for O’Donoghue’s third score.

Tipp responded again through Grogan, who nailed a close range free after being fouled by his marker Ó Sé. Kerry, although playing in fits and starts, were better able to construct attacks and were rewarded with a well-worked score from Anthony Maher.

A clever O’Donoghue pass then opened up the Tipp defence for Walsh to solo towards goal, his shot being deflected into Donaghy’s path for point number eight.

Kerry began to motor approaching half-time with a fisted effort from Tomás Ó Sé followed by a Galvin brace, as the Tipp half-back line gave away yet again.

Conor Sweeney clipped over a free for the Premier County before the break, although Grogan and Philip Austin pushed their wides tally to eight.

The Kingdom were fast out of the blocks once more on the restart, Walsh and Cooper threading neat passes through for O’Donoghue to race in and blast to the net past goalkeeper Paul Fitzgerald.

They kept plugging away and Sweeney converted his second free before Austin registered their first score from play in the 43rd minute. 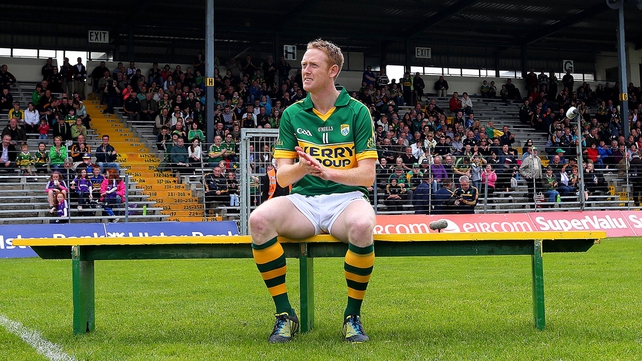 They had a second soon after from hard-working corner back McDonald, and net minder Fitzgerald then showed impressive agility to tip away an improvised lob from Walsh.

But Tipp’s race was run when Grogan was sent off for his second bookable offence - a foul on the advancing Aidan O’Mahony - in the 48th minute.

Cooper, captaining Kerry with Eoin Brosnan on the sidelines, lofted over a terrific score from the left wing and Buckley tagged on a free as the hosts broke into an ominous canter.

Galvin received a harsh yellow card for a full-blooded challenge on Tipp corner back John Coghlan, with the Kerry supporters letting referee Conor Lane know of their disgust.

Normal service was resumed when Declan O’Sullivan pointed on the turn and Cooper, in acres of space, thrilled the crowd with a delightful pick-up and score.

With the competitiveness of the game now gone, Cooper showed his class on the ball with a well-struck free and then a dummy and point off his weaker right foot.

Buckley pointed from centre-field and Kerry added some late gloss with that 64th-minute goal from Darran O’Sullivan, who profited from a fine catch and feed from Donaghy.

O’Sullivan could have had a second goal in injury-time, but Fitzgerald came to Tipp’s rescue by parrying a powerful shot away to his left.

A third pointed free from Sweeney was all Tipperary could muster in the closing stages, which was cancelled out by a Bryan Sheehan ‘45’.

Peter Acheson was unfortunate to nick a goal-scoring opportunity off the right hand post but, by that time, Kerry were already casting their minds ahead to next Saturday’s semi-final trip to Waterford.

Highlights and analysis of all the weekend’s action on The Sunday Game from 21:30 on Sunday 26 May on RTÉ Two and RTÉ.ie (Ireland only).