Donal O’Hare’s nine-point tally helped Down to their first Allianz Division 1 win of the season at Pairc Esler.

O’Hare converted three frees to help the Mourne men come from behind to lead Mayo 0-6 to 0-4 at the break.

The Burren man kept Down ticking over in the second half, but Mayo goalkeeper Kenneth O’Malley levelled matters from a ’45, before two late scores from O’Hare sealed the points for James McCartan’s side with a 0-13 to 0-11 win.

Mayo played with wind advantage in the first half, but it was Down who made all the early running, going in front with a Donal O’Hare free.

Mayo’s first attack in the seventh minute saw Jason Doherty slip inside marker Benny McArdle to craft a goal chance, but he settled for a fisted point.

Paul McComiskey, dropping back as a sweeper, raided along the right flank to kick the first Mourne score from play, but once again Doherty levelled, this time from a free.

Aidan O’Shea surged through the middle, linking with Donal Vaughan to set up another decent goal chance, but once again, the westerners opted for a point, which Michael Conroy executed with the fist.

By the end of the opening quarter the Connacht side had built up a 0-4 to 0-2 lead, but it was Down who went two clear on the half-hour mark, wing back Ryan Mallon getting on the end of a patient build-up to float over a quality score.

By that stage, O’Hare had converted four frees, and a Down side that had looked more compact and composed took a 0-6 to 0-4 lead into the interval.

O’Hare was on target twice more inside the opening two minutes of the second half, but Down needed a wonderful save from Brendan McVeigh to deny Barry Moran, sent clear by Lee Keegan.

Two Doherty frees brought the sides level in the 57th minute as Barry Moran lifted his game in the middle of the park.

But O’Hare was in irresistible form, swinging over an inspirational free from the sideline to restore the Ulster side’s two-point cushion.

The westerners were not finished yet however, and levelled again after goalkeeper Kenneth O’Malley stepped up to send a ’45 sailing between the posts.

Fittingly, man of the match O’Hare had the final say, edging his side back in front, before landing a majestic insurance point from play. 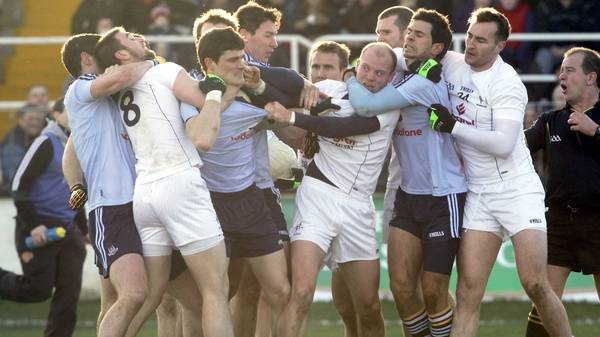