Leinster came with a late surge to edge out Connacht in an exciting M Donnelly football semi-final at Glennon Brothers Pearse Park in Longford.

Connacht seemed poised for victory when they opened up a five-point lead in the final quarter but Leinster hit back with six points in the closing eight minutes to book a place in the final.

Bernard Brogan was the Leinster hero as he scored four points in a dramatic finish and in the end the Dublin star finished with 0-09.

Connacht led by 0-14 to 1-08 at half-time having played with the wind, but a scrambled Joe Sheridan goal after six minutes gave Leinster a foundation.

Indeed, aside from a second minute Paul Conroy point, Connacht did not manage to hit the front again until three minutes from the interval when Mark Brehony landed a good free.

Mayo’s Michael Conroy was superb for Connacht in the opening half, kicking four points from play in an excellent showing, although he faded in the second half.

Connacht got on top in the second quarter and drew level with a Conroy point after 29 minutes.

John Heslin and Emlyn Mulligan swapped points before efforts from Brehony, Paul Conroy and Mulligan left Connacht 0-14 to 1-08 ahead at the break. 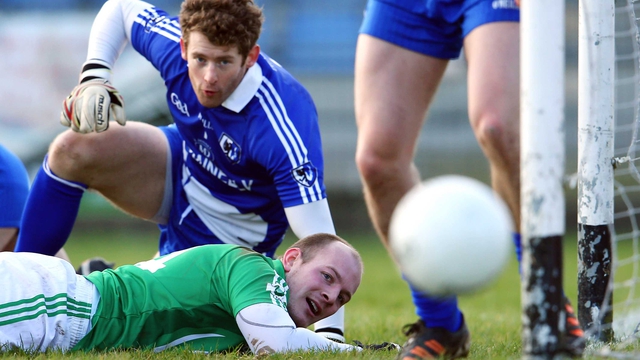 The sides hit three points each in the third quarter before Leinster hauled Connacht in with points from Brian O’Connor, Sean McCormack and Paddy Keenan to level the game at 1-14 to 0-17 after 55 minutes.

Michael Darragh Macauley pushed Leinster ahead but then Connacht hit back with an equaliser from Brehony before Paul Conroy finished to the net after goalkeeper Stephen Cluxton failed to deal with a high delivery from Seamus O’Shea.

Paul Conroy sent another goal chance flying over the bar and Lee Keegan also pointed for Connacht to lead by 1-20 to 1-15.

McCormack led the Leinster revival when he pointed from the right after 62 minutes.

Brogan flashed over a couple of points and then Flynn left just one between them when his effort went just over the crossbar five minutes from time.

Leinster continued to press and Brogan hit the equaliser with a free a minute later and he also scored the winner when he latched on to a McCormack delivery to fist the ball over the crossbar.