In a gripping encounter, Monaghan led by nine points at one stage, but the Mourne men turned the game around in the second half in remarkable fashion to set up a meeting with either Donegal or Tyrone in the provincial decider.

The Farney men looked set to spark a shock when they raced into a 0-11 to 0-2 lead, but Down grabbed a crucial goal in first half stoppage time, and controlled the second half before Darren O'Hagan punched over the winning point in injury time.

Monaghan burst into action with energy and drive, hitting the game’s first three points, including a spectacular Paul Finlay effort from the sideline.

Down finally got off the mark in the ninth minute with an Ambrose Rogers free, and they did craft a goal chance, but Owen Lennon intercepted superbly as Eoin McCartan tried to release Donal O’Hare.

But it was Monaghan who continued to display all the adventure and ideas and a wonderful score from Conor McManus restored their three-point advantage.

Lennon and Dick Clerkin gave Eamonn McEneaney’s side a platform at midfield and
when McManus and Finlay steered over frees, they led by 0-6 to 0-1 midway through the first half.

The Mourne defence struggled to contain the pace and movement of McManus, James Turley and Pete Dooney and Down had fallen six points behind when O’Hare pulled back a point from a free.

They did have a goal chance when Rogers burst forward, but he was denied by a brilliant Mark Keogh save.

McManus kicked two glorious frees to bring his tally to five, Finlay stroked over his fourth, and Dick Clerkin opened up a gaping nine-point gap.

Down were handed a lifeline in first half stoppage time when Aidan Carr slotted home a penalty after Vinnie Coey had fouled Conor Laverty, but they trailed by 0-11 to 1-2 at the break.

The Mourne men, with Kalum King and Ambrose Rogers lifting their game at midfield, narrowed the gap back to three points within 10 minutes of the restart with scores from Donal O’Hare and substitute Kevin Duffin.

And when a superb take by full back Brendan McArdle launched a flowing move, Conor Laverty applied the finishing touch with a delightful point.

Monaghan struggled to get any attacking movement going, but they did create a goal chance when McManus released James Turley, but goalkeeper Brendan McVeigh rose to the occasion with a superb save.

And Monaghan countered for Tommy Freeman, just onto the field as a substitute, to collect a quickly taken free from McManus, to blast home a 57th minute goal.

Down refused to panic, and persisted with their measured approach and after O’Hare had converted two more frees, Benny Coulter came off the bench to hit a crucial score.

Liam Doyle brought the sides level from a free and when Aidan Carr’s delivery fell to O’Hagan in stoppage time, he calmly punched the ball over the bar for a glorious stoppage time winner 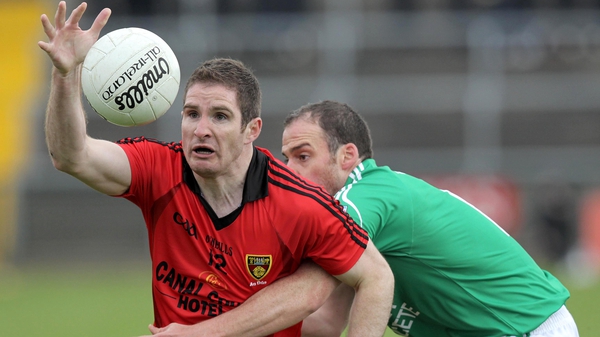