Poots is the first DUP politician to attend a Gaelic football match in an official capacity.

Brennan said: 'This is a landmark occasion in the further development of community relations on the island of Ireland when a Unionist Minister is prepared to attend one of our games.

'For me this highlights the good standing of the Ulster Council who I know have developed an exceptionally positive relationship with Mr Poots.

'I am absolutely enthused that the Minister has been so receptive to the role and relevance of the GAA in Ulster and the contribution it makes to sport and communities.'

The match itself was dominated by Down, whose powerful display boosted their hopes of securing a semi-final place in the McKenna Cup.

The win pushes Ross Carr's side into second place in Section B and they have an outstanding game against table-toppers UUJ next Saturday at Newcastle.

Both teams played stylish football on the night in the ideal conditions but it was two first half goals from Down corner-forward John McAreavey, along with an opening goal from Drumgath midfielder Jack Lync,h that got the Mourne men off to a tremendous start.

They led 3-07 to 0-07 at half-time and were always the more likely winners against a very experimental Donegal side.

Brian McIver made eight changes to the team that beat Tyrone by a point last Sunday with Colm McFadden, top-scorer in that game, being sprung from the bench towards the end of the first half.

The return of Liam Doyle from injury and inspirational performances from Ronan Sexton, McAreavey and Lynch saw Down gallop into a 0-04 to 0-01 lead after eight minutes' play.

Half-forward Odhran Doherty cut the gap to two points for Donegal after some tremendous work by the visitors' defence but the home side continued to pile on the pressure and were rewarded heavily in the 13th minute when the crowd sprung to life after Lynch's goal.

Down half-forward Daniel Hughes was heavily involved in the move before he laid the ball off to Lynch, who had no hesitation in planting the ball in the net.

However, Donegal responded positively from the resulting kickout with a Kevin McMenamin point before Hughes watched on as a second goal chance for Down came back off the crossbar after a McAreavey pass.

A second point from Doherty cut the gap to a goal but Down were very much on fire and quickly built up a 2-07 to 0-04 buffer.

Donegal bounced back with two points from McMenamin but a goal from McAreavey, with two minutes remaining in the half, put Down firmly in control at the interval.

Donegal opened the second half brightly with McFadden starting where he left off with a pointed free after 45 seconds.

This score was quickly cancelled out by a McAreavey point but Down were now in a bit of trouble after being reduced to 14 men.

Carr's side were dealt a major blow following a second yellow card for Brendan McKiernan and Donegal tried their utmost to mount a comeback.

Two Ryan Bradley points cut the gap to seven points ten minutes into the half, but a minute later the visitors were also reduced to 14 men.

Armagh referee Paudie Hughes was brandishing plenty of yellow cards at this stage and had no hesitation in showing a second yellow card to Eamon McGee.

Down bounced back and points from Lynch and Hughes quickly restored their three-goal advantage.

Donegal had reduced the arrears to seven points midway through the half thanks to pointed frees from Bradley and McFadden.

The home side played with passion in the closing stages with excellent long range points from Dan Gordon and McAreavey, complemented by two well-taken goals.

There was no denying Down and they sealed the win in the 66th minute with quick goals from Packie Downey and Daniel Hughes. 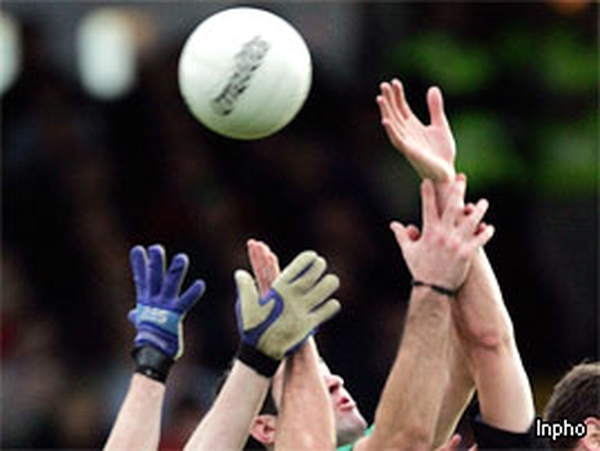