Wales reached their first ever semi-final of a major tournament with a magnificent victory over Belgium in Lille.

On a night dripping with raw emotion in northern France, Wales went one better than their 1958 predecessors who reached the last eight of the World Cup.

They also did it the hard way after falling behind to Radja Nainggolan's thunderous strike, with Ashley Williams, Hal Robson-Kanu and substitute Sam Vokes proving the goal-scoring heroes.

They will now meet Portugal in the semi-final in Lyon on Wednesday, but must do so without Ben Davies and Aaron Ramsey, absolutely outstanding again here, who collected their second cautions of the tournament.

It used to be asked who would provide Wales with goals if Gareth Bale - who will now come up against his Real Madrid team-mate Cristiano Ronaldo in Lyon - did not score.

But those questions are not being posed right now. 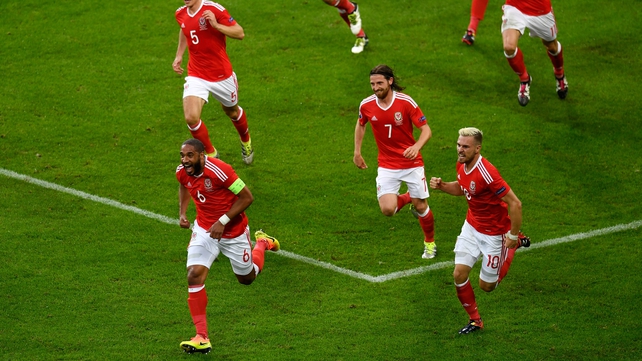 Then Robson-Kanu, a man without a club after leaving Reading this summer, scored a sensational individual goal 10 minutes after the break.

Robson-Kanu's return to the side was a master stroke, preferred to Vokes after missing out in the last two games, as his extra mobility had troubled Belgium when Wales inflicted a 1-0 defeat on them in Euro qualifying in Cardiff just over a year ago.

That was the result, as well as two Brussels draws, which had persuaded Bale to describe Wales as Belgium's bogey team in the build-up to this quarter-final.

And those words rang true five minutes from time when Vokes, who had only just been introduced, headed home Chris Gunter's cross to confirm Wales as Britain's first semi-finalists at a major tournament for 20 years.

This was the biggest night in Welsh football history since the 1958 World Cup quarter-final defeat to Brazil, the country having waited 58 years to return to a major tournament.

Hundreds of Wales fans were caught up in Eurotunnel delays before kick-off, but there did not look a spare seat at the Stade Pierre-Mauroy, with Belgians having travelled in their thousands from just across the border.

Belgium's defence had to cope with disruption caused by the suspension of Thomas Vermaelen and the ankle ligament damage suffered by Jan Vertonghen in their final training session on Thursday morning.

The fresh-faced Belgian defenders also had to contend with the controversial pitch as well as Bale, the surface having been relaid eight days ago but open to the falling rain with the stadium roof open.

But it was the Wales defence which had a torrid opening with Davies, James Chester and Chris Gunter all picking up early cautions.

Davies' yellow card was particularly hurtful as it would rule him out of a potential semi-final, but there was more pain for Wales after Wayne Hennessey had foiled Yannick Carrasco and Neil Taylor had blocked Meunier's follow-up on the line. 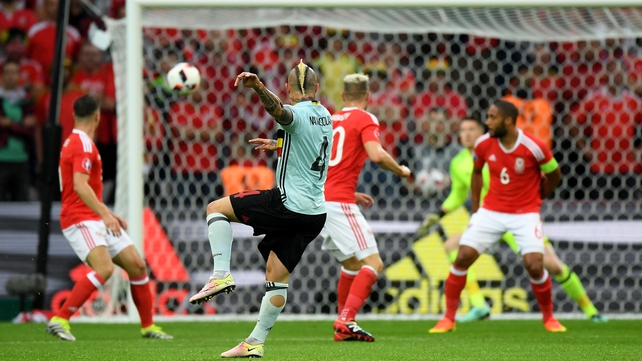 Eden Hazard laid the ball into Nainggolan and the midfielder struck a 30-yard thunderbolt which flew past Hennessey.

Apart from two minutes and 31 seconds at the end of their group game defeat to England it was the first time Wales had found themselves behind in the tournament.

Wales slowly settled after the shock of conceding and the nation went wild when Williams was left unmarked from Ramsey's corner to head home his second international goal.

Wales were even dominating possession, something which had not been expected at the start, and Bale tested Courtois with a low right-foot shot before the Belgium goalkeeper held Robson-Kanu's header on the stroke of half-time.

Belgium's response was to start the second half like they had the first, Romelu Lukaku wasting a free header from eight yards out and Hazard firing just wide.

But they were stunned after 55 minutes when Ramsey raced down the right and crossed for Robson-Kanu, the striker leaving three defenders in his wake with a cute drag back and slotting into the corner past Courtois.