Hours after becoming the first Black African rider to win a Grand Tour stage, Eritrea's Biniam Girmay has been forced to abandon the Giro d'Italia after suffering an eye injury during the podium celebrations.

The 22-year-old claimed stage 10 with an impressive sprint, his celebrations were brought to a premature end by a cork.

The Intermarche-Wanty-Gobert rider appeared to be struck in the left eye while attempting to uncork a bottle of prosecco on the podium, following which he was taken for a hospital check-up.

He later returned to the team hotel and was resting after his medical check, but this morning it was confirmed he will take no further part in the race as a precautionary measure.

"Today I didn't start the race because of my eye. I need some rest to give more power to the eye," he said in a statement.

"Yesterday when I arrived after the hospital, at a bad moment, I enjoyed a bit with my teammates and staff and everyone. I'm also happy now. I was a bit sad about what happened with the champagne but when I came back in hotel they were super happy.

"They were a bit afraid, but when it looked ok, I really enjoyed it, I'm happy."

Team doctor Piet Daneels said: "Following an incident on the podium, medical examinations revealed a hemorrhage in the anterior chamber of the left eye of Biniam Girmay. His injury is evolving in the right direction and will be followed up by a medical team in the next days."

The 22-year-old had recovered from nearly missing a left turn with just over 6 km to go and fended off Mathieu van der Poel to win the 196-km ride from the coastal town of Pescara to Jesi.

Girmay, who finished second in the opening stage, was led out by team mate Domenico Pozzovivo in the final stretch.

"I started the Giro with the desire to win a stage. Everyone from the team pulled for me, even the (general classification) riders, Domenico Pozzovivo was amazing at the end," Girmay said after the race.

"At 600m to go, he said 'come'. He pushed me to go and win. I realise I'm making history but it's thanks to my team and my family. I'm really grateful to them." 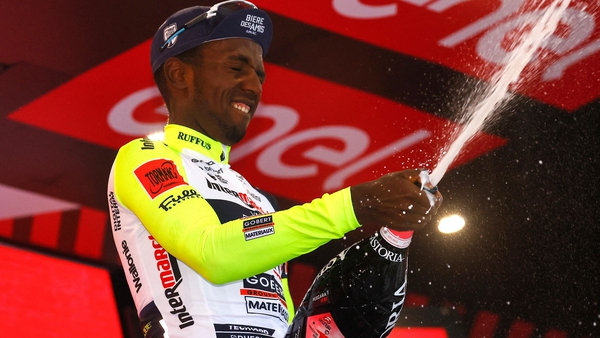