Geraint Thomas shrugged off his third crash of the Tour de France as Caleb Ewan won stage 16 in soaring temperatures in Nimes.

Defending champion Thomas hit the deck with around 130km of the 177km stage to go on the inside of a right-hand bend but quickly returned to the peloton after dropping back to the Ineos team car for a once over.

"I just took off an old scar so it was new skin bleeding," said Thomas, who also fell on the opening stage and stage eight to Saint Etienne.

"I just had one hand on the bars and the gears jumped and jammed and I got thrown off my bike on a corner.

"I knew the race wasn't on so I just got back into the group, it's just frustrating. It was such a freak thing."

Dan Martin finished in the leading pack and couldn't make any inroads on the 11 minute 39 second gap to the yellow jersey, but does move up two places to 13th in the general classification.

Thomas meanwhile may have collected a few grazes, but he remains second in the general classification, 95 seconds behind Frenchman Julian Alaphilippe.

Though the Welshman is in pole position should Alaphilippe fall away as expected in the Alps, four riders are bunched within 39 seconds of him, with the Tour as wide open as it has been for many a year going into the final stages.

Astana's Jakob Fuglsang is no longer a factor, however, as his Tour was ended by a crash inside the last 30km, leaving the Dane to climb into an ambulance and out of a race in which he had sat ninth overall.

The spills were rare moments of drama in a stage raced in soaring temperatures of over 40 degrees in the south of France.

Afterwards, three-time former world champion Peter Sagan complained about the temperatures and suggested the Professional Cyclists Association, the CPA, should do more to protect riders.

"If it's as hot as this in the mountains..." he said, imitating slitting his throat with his hand. "The CPA should do something.

"They should do something to protect us. That's what we pay them for."

Team Ineos sporting director Nico Portal said he had set off with as many as 10 sets of water bottles for riders in the team car, but was out of stock with only half the stage gone.

"Today is very, very hot, everybody knows that but after 90 kilometres we had both cars empty with bidons, it was probably the same with other team cars," he said.

"It was also humid so the guys, especially the breakaway, must be very, very tired."

Alaphilippe skipped a number of the post-race protocols for the yellow jersey, with the Deceuninck-Quick Step rider said to be dehydrated.

On the road, a five-man breakaway was given little leeway though not reeled in until the final three kilometres as the sprint trains moved up.

"I don't know if I can say I'm the best sprinter in the world but I think I've shown I'm the most consistent here," the Australian said. "Every sprint I've been on the podium."

The Tour now veers towards the Alps. Heat could be an issue on Wednesday's rolling stage from the Pont du Gard to Gap, where temperatures are expected to be around 33 degrees.

Things should cool off meteorologically speaking once the race is in the high mountains, but with the fight for yellow so close, the battle on the road will only heat up.

"We saw in the Pyrenees and the third big day into Foix there were some guys not quite as strong as they were in previous stages," said Thomas.

"I think the three days in the Alps are going to be even bigger." 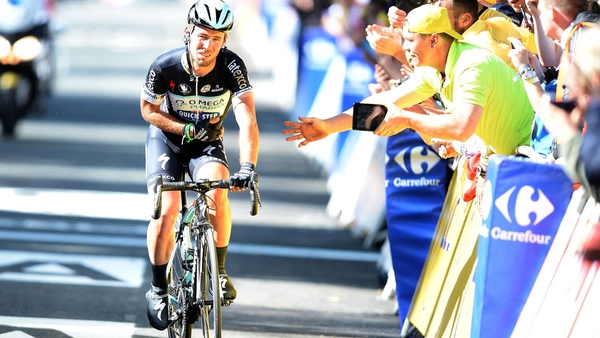