The Irishman finished Thursday's stage six in 14th place, nearly two minutes down on stage winner Dylan Teuns but crucially only 14 seconds behind reigning champion Geraint Thomas, whose late dig answered questions over his own form as he finished the best of the main contenders.

Martin could not keep pace at the end of a final kilometre that switched between imposing gradients reaching 24 per cent and a gravel surface which meant riders struggled to put the power down, but he crossed the line alongside Adam Yates to sit 18th in GC, 56 seconds behind Thomas.

Martin put his time losses down to his positioning in the group rather than his legs at the finish.

"Once we hit the dirt part there was a big acceleration by Julian (Alaphilippe) that caught me a bit by surprise so I kind of slotted into position in the group," the UAE Team Emirates rider told PA.

"I dare say probably in the last 500m I didn't lose that much time to G (Thomas) but gaps opened up in the group in front of me and I just rode my pace to the finish line."

It wasn't so much me running out of legs, I was just...not sleeping but I just didn't have the explosiveness, especially on the dirt

Though Thomas had said the finale would be one for punchy riders, the gravel surface ultimately proved to be one that suited someone who could power up it.

"It wasn't so much me running out of legs, I was just...not sleeping but I just didn't have the explosiveness, especially on the dirt," Martin added.

"I just couldn't push the pedals any harder."

Thursday was the first mountain test of the Tour but one that came after the lumpy stage three to Epernay and the rolling roads of stage five to Colmar.

"It wasn't as much of a shock to the system as it usually is in the Tour de France when you hit the first mountain," Martin said.

"It was a hard effort, really on the steep gradients at the end you saw a difference, but on the rest of the climb really you saw how close the competitors are, so I think the gaps are going to be pretty small on every mountain-top finish.

"Like I said before, I think the guy who wins this Tour is going to be the guy who has the least bad bad day.

"It's going to be a case of a war of attrition rather than explosive attacks where you take some time."

The next real mountains come when the race hits Martin's favoured Pyrenees next week, but plenty of tests fill the gap with two lumpy days in the Massif Central to come this weekend.

"Hopefully we won't see much happening in the GC battle but it's all part of the wearing-down process," Martin said.

"They're tough days, not only the distance but the cumulative climbing and the heat as well as we get towards the south.

"It's going to be a really tough few days and that war of attrition starts now." 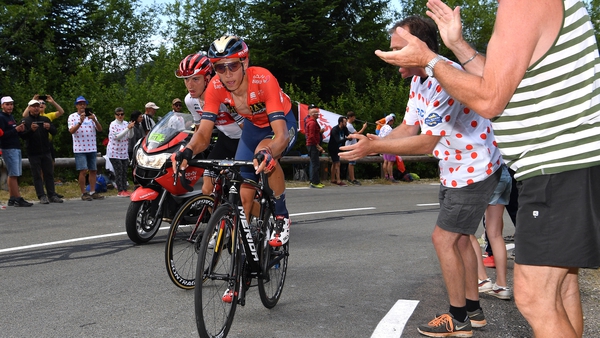