Team Ineos principal Dave Brailsford is convinced Chris Froome will fight to return to top-level cycling after his life-threatening crash.

Froome suffered extensive injuries when his bike hit a wall at almost 55 kilometres per hour on Wednesday during his fourth-stage reconnaissance of the Criterium du Dauphine.

The four-time Tour de France winner is recovering at the University Hospital of St Etienne where he underwent a six-hour operation.

But Brailsford does not think the 34-year-old will retire from the sport.

"It's quite difficult to see that if I'm being honest with you," Brailsford told BBC 5 Live's Sportsweek.

"I think he will try and get back. Who knows how this will impact on him, but I don't think it will be the case where he'll just say 'right, I'm satisfied now I'll hang up my wheels and call it a day'.

"I think he's more likely to really work hard in rehab and push himself really hard. He'll take the same approach to that I'm sure as he does to his sport.

"If I was a betting man I'd say yes we'll seem him back at some point in the future."

Brailsford said he expected Team Ineos and the sport in general to review rider safety following the accident.

"I think when major incidents happen like this it does make you sit back and think about safety," he said.

"It's something we're going to take on board because inherently you have to take risks in this sport to be able to race at the level required.

"There are dangers associated with it and equally we could look very carefully, not just as a team and our riders, but as a sport and see whether (dangers) could be minimised."

Brailsford suggested all riders could wear special kevlar-based clothing to help protect them against impact.

"There are possible advances and let's face it, if the entire sport said everybody has to ride with 'x', then it wouldn't disadvantage anybody because they'd all be doing the same thing," he said.

"So it is an opportunity really to reflect and just think about, maybe as Formula 1 has moved forward in the last 10 or 15 years, why shouldn't cycling?"

Brailsford said he was not sure when Froome would be able to get back on a bike again, but added Team Ineos will have extra motivation to win this year's Tour as a tribute to their lead rider.

"Yes, I think that would be entirely plausible and logical really," he said. "When something like that does happen, when it's quite traumatic, then it's a human reaction I think, so it would be no surprise at all.

"There's been quite an out-pouring of emotion afterwards, not only himself but among the team, and that's normal and I'm sure that will continue into the Tour." 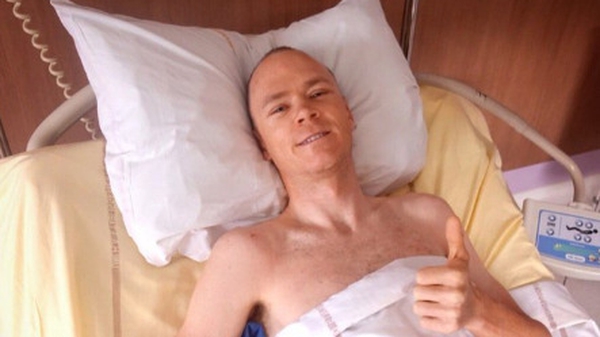