Mark Adair's early heroics could not prevent Ireland falling to a three-wicket defeat to New Zealand in the second one-day international in Malahide.

Adair took the wickets of Martin Guptill and Will Young with the first two balls of the Kiwi innings as they set about chasing down the hosts' modest 216.

But a fine 60 from Finn Allen soon steadied the visitors' nerves and backed by a strong bowling performance of their own, they cruised to a victory which also sealed the series with one game remaining. 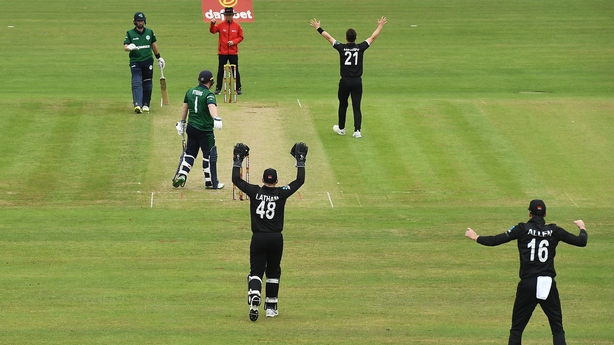 Michael Bracewell, Mitchell Santner and Matt Henry each helped themselves to two wickets as New Zealand immediately set about the Irish attack.

Under pressure, it was only a fine 74 from George Dockrell and a gutsy unbeaten 27 from Adair that enabled Ireland to amass a reasonable total.

But rising Irish hopes after the dramatic start to the New Zealand innings soon fell away as the Black Caps composed themselves and Tom Latham joined Allen in earning a half-century.

A middle-order wobble made the result far from certain until Bracewell translated his fine form with the ball to the bat, with his unbeaten 42 carrying the tourists over the line with 71 balls to spare.