John Mooney took Ireland’s first ever Twenty20 hat-trick and opener Paul Stirling hit 55 off 38 balls as Ireland beat Jersey to secure their place at the T20 World Cup in India next year.

Victory in their final group A game at the ICC World Cup Qualifiers in Malahide and results elsewhere in the group saw Ireland top the qualification pool, thus securing the coveted spot.

The seven-wicket win was a welcome one for Ireland after unexpected losses earlier in the week to both Papua New Guinea and Hong Kong.

Opener Paul Stirling, who also took three wickets in the Jersey innings, won the man-of-the-match award after his contribution of 55 off just 38 deliveries.

Ireland won the toss and put Jersey into bat. On a slow pitch, which offered little to the bowlers due to heavy overnight rain, Jersey eventually reached 122 all-out in the final over having at one stage been on 106 for 2 in the 16th over.

Mooney struck in the final over to take the wickets of Chuggy Perchard, Ben Kyman and Phys Palmer for his historic hat-trick. 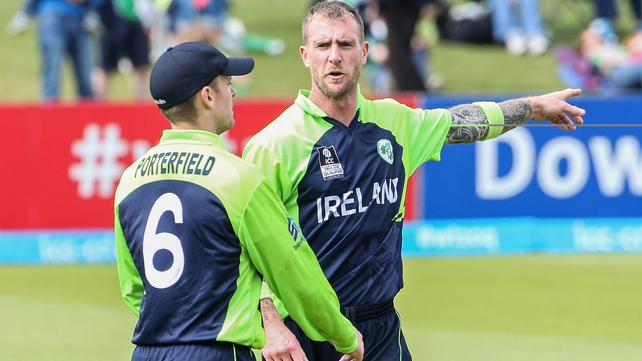 Earlier, opener Ed Farley made 21, while Jonty Jenner made a brisk 26 off just 21 deliveries to lay the platform for the Jersey innings.

Peter Gough, Farley’s fellow opener, hung around until the 17th over before eventually falling to a fine Stuart Poynter catch off the bowling of Alex Cusack for 42 and Ireland were finally among the wickets as the runs dried up for Jersey.

Outside of Mooney, spinner Paul Stirling also took three wickets for the concession of 16 runs off his four overs, while Alex Cusack returned figures of three for 26 from his spell.

In reply, captain William Porterfield was dropped early before reaching 17, departing in the fifth over, caught in the deep off the bowling of Anthony Kay.

However, Stirling carried on the Irish innings, reaching his half century in the 11th over to lay the platform for victory.

Ireland top the group with eight points from their six games as Namibia and Papua New Guinea both lost this afternoon.

Those two sides had a chance to deny Ireland the automatic place for group winners, but they lost to Hong Kong and the USA respectively. It also means that Ireland go straight into the semi-finals next Saturday.

"We are delighted to have topped the group and made it through to the next qualifying phase in India," said a very happy but relieved Porterfield.

"It's not the way we would have liked to have done it by relying on other results. However, we turned in a very solid performance today, and we'll take a lot of momentum and confidence from that going into the finals weekend."